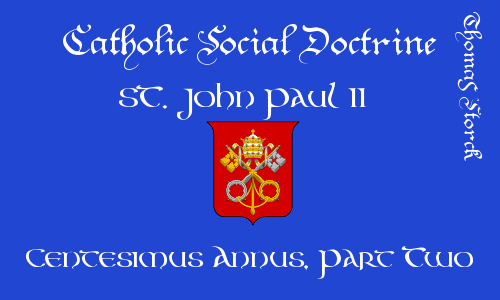 In this article I will conclude the discussion of Centesimus Annus and bring the series on papal social teaching to an end. The fourth and longest chapter of Centesimus Annus concerns the twin truths of the right to private property, and at the same time, of the universal destination of material goods. This is the same truth that Leo XIII stated when he said, ” … the earth, though divided among private owners, ceases not thereby to minister to the needs of all” (Rerum Novarum, §7).[1] That is, the reason that God has instituted the private ownership of property among men is not to exclude anyone from his share of the earth’s bounty, but rather to make possible the efficient and peaceful provision of sufficient goods for all. Thus private property is simply a means to an end; it is not an end in itself. Though it is surely a means consonant with human nature, and therefore it cannot be abrogated by human law, it is nevertheless subordinate to its end, and thus can be regulated so as to better attain that end. Thus the chief matter that the Holy Father takes up in this chapter is what he calls “the legitimacy of private ownership, as well as the limits which are imposed on it” (Centesimus Annus, §30).