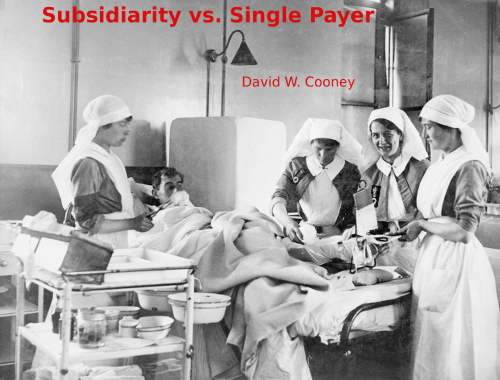 In his article, “Subsidiarity and the Single Payer,” Jack Quirk argues that a Single Payer system for health care services is consistent with the principles of subsidiarity and Catholic Social Teaching. He concludes his article by stating that the “principle of subsidiarity cannot legitimately be used to argue against a single-payer healthcare system. … Those who argue against it will need to avail themselves of something outside of Catholic social teaching for support.” His argument seems to depend on two points which I think are incorrect. The first is that the question of subsidiarity “does not turn on jurisdiction, but on competence. Subsidiarity is not federalism.” The second is the fact that some health care services are very expensive, and the fact that health insurers in the United States lack the power to contain those costs, means that the highest level of government has the right and responsibility, according to the principles of subsidiarity, to step in to assist paying for all health care services. This response is an explanation of why I believe he is wrong on both points.