On the Foundations of Distributism: Property, Family, Politics, Economy. Part 4 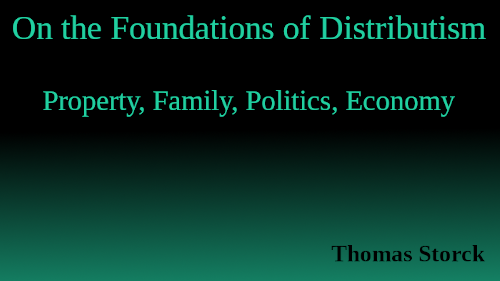 Part 3 can be found here.
Political parties and democratic party representation are in crisis all over the world. Distributism considers the corporativism principle the only valid tool on which to base democratic political participation. Can you please articulate further this concept?
In all or nearly all democratic countries today representatives in the legislative body are chosen by voters according to the district or province in which they live. This is in accordance with the fundamental principle of eighteenth-century liberalism, that the political community is simply an assemblage of citizens, and that any smaller or lesser groupings in society have no political significance.
This is in contrast with the medieval understanding of the political community as a community of communities, or corporations, meaning corporate bodies of various kinds, in which individuals had significance and exercised powers and functions as members of these smaller and lesser communities. But these lesser communities, guilds, municipalities, universities conceived as corporate bodies, other social or economic sectors, have largely vanished or lost their character and powers as real corporate entities. As Pius XI put it, with the disappearance of "the highly developed social life which once flourished in a variety of prosperous and interdependent institutions" nothing remains but "only individuals and the State" (Quadragesimo Anno, no. 78). Each citizen is nothing more than an equal atom in a largely undifferentiated mass of other atoms.
The corporativist political principle, on the other hand, takes seriously the fact that citizens are naturally members of smaller groups, groups with their own interests, needs and insights. Hence in the legislature representatives are chosen not simply by single individual voters differentiated only by locality, but may represent groups, usually economic or professional groups. So, for example, in the national legislature there may be deputies chosen by, say, the grocers guild or the mechanics guild or the physicians guild or the agricultural sector. In a bicameral legislative body, one chamber may be chosen according to the corporatist principle, while the other may be chosen simply by voters by locality.
The Irish legislature operates in part according to such a principle, the upper house or seanad (senate) is composed of representatives of various social sectors and graduates of specific universities. Article 18 of the Irish constitution provides for three members of the seanad to be elected by the National University of Ireland and three by the University of Dublin. In addition the following social and economic sectors receive representation:
But in the case of Ireland the corporativist principle is considerably diluted, since the seanad has merely advisory powers, with the ability only to delay legislation.
The reasons for thinking that the corporativist approach to representation has desirable features are two, one more theoretical, the other more practical. On the theoretical level, it makes concrete the fact that people are more than simply undifferentiated citizens of a political entity, that they have other identities, interests, needs, experiences and knowledge. The body politic, as was widely recognized in the past, is more like a real living body, with different organs performing different functions, all necessary to the smooth operation of the whole, but no one of which can be reduced to another.
The second reason is that in actual fact, various sectors of society or the economy do need to have an effective voice in the national legislature, to make known their needs and special problems. In a legislature constituted solely according to the liberal understanding of the body politic, individual representatives or deputies may not understand or may not wish to make known all the needs and problems of all sectors of their constituents. A legislature of the corporativist type is more likely to provide an opportunity for every sector's voice to be heard.
Having said this, and while I think that this kind of representation has much to recommend it, and indeed should probably be embodied in some way in one legislative chamber, I would not say that distributism requires such representation or considers it as the only correct method of democratic politics. Here much depends on the political culture and traditions of a country. Many European and Latin-American nations have some historic experience with corporativist forms of government, or at least knowledge of what the term means. On the other hand, in the United States not only has there been no historical experience of them, but hardly anyone, except specialists in European politics or history, is even cognizant of their existence or meaning. In fact, the term itself, corporation, is generally understood in the United States to mean a limited liability business entity, a società anonima. Of course the question of nomenclature could probably be overcome, but the idea itself would be seen as simply bizarre, especially given the uncritical devotion of so many Americans to their Constitution, a document which knows of no principle of representation other than that of place, by state or district.
The finance system seems today to hold much more power than the political system. Distributism has always stated that money and finance should be subjected and oriented to the common good and managed by the legitimate political power for the interest of all citizens. What do you think could be the contribution of distributism in such delicate and important matter?
As long ago as 1931, Pius XI recognized the key place which finance holds in a modern economy. In Quadragesimo Anno, no. 106, he wrote,

This [economic] power becomes particularly irresistible when exercised by those who, because they hold and control money, are able also to govern credit and determine its allotment, for that reason supplying so to speak, the life-blood to the entire economic body, and grasping, as it were, in their hands the very soul of the economy, so that no one dare breathe against their will.

According to Catholic social teaching the financial sector, like every other sector of the economy, ought to be subject to the common good. One obvious way to do this would be to have it be controlled directly by the state, either by the central or local or municipal authorities. And probably none of these arrangements would be unjust. In Quadragesimo Anno Pius XI spoke of "that type of social authority, which, in violation of all justice has been seized and usurped by the owners of wealth," and which

in fact belongs not to the individual owners, but to the State.... For it is rightly contended that certain forms of property must be reserved to the State, since they carry with them an opportunity of domination too great to be left to private individuals without injury to the community at large.  (no. 114)

Certainly a good case could be made that the financial sector belongs here, since it supplies "the life-blood to the entire economic body." But distributism, which advocates decentralization as much as is reasonable, suggests another approach.[i] To understand this we must look again at a subject I have spoken of more than once, the guild or occupational group.
A guild is made up of actual producers or suppliers of products, those who are engaged in the primary economic activities for the sake of which the economy exists. For it is the production of real goods and services that the economy is primarily for. Finance, on the other hand, is a subordinate activity, whose function is to facilitate production. Finance should be subordinate to production and financiers should be subordinate to producers and suppliers. A distributist method of accomplishing this would be for occupational groups to have their own financial institutions, similar to credit unions (cooperative banks), which would exist for the sake of necessary financing for that trade or industry or profession. Belloc wrote on this point, "...there should be fostered the spread...of these properly chartered co-operative banks, connected with the guilds of every description."[ii] If a particular occupational group was too small to have its own financial arm, it could easily join or work with another occupational group. This would also have the benefit that finance would not see itself as a separate interest, apart from or even superior to actual production, and so would not assume unwarranted power in the economic or political system. These financial institutions could also take care of the need for consumer credit or that could be accomplished by ordinary credit unions not connected with occupational groups, but subject to local or municipal regulation.
Distributism seeks for well-distributed property as a safeguard for the family, but also as a safeguard for society. The greater the concentrations of property and wealth, the more easily can those possessing that property and wealth misuse it and even seek to divert the political process in their favor. The more divided and distributed property is, the less likely is this to occur. A distributist approach to the financial sector is simply another example of how distributism desires as much as is feasible to make the economy work for families, for the common good and for the welfare of all.
Printable version
Notes:
[i] On decentralization, compare the important principle of subsidiarity,  originally stated by Pius XI in Quadragesimo Anno (no. 79) as follows: "...it is a fundamental principle of social philosophy, fixed and unchangeable, that one should not withdraw from individuals and commit to the community what they can accomplish by their own enterprise and industry. So, too, it is an injustice and at the same time a grave evil and a disturbance of right order, to transfer to the larger and higher collectivity functions which can be performed and provided for by lesser and subordinate bodies. Inasmuch as every social activity should, by its very nature, prove a help to members of the body social, it should never destroy or absorb them."
[ii] The Restoration of Property, p. 144.
Posted by Practical Distributism