Distributism Basics: The Science of Economics 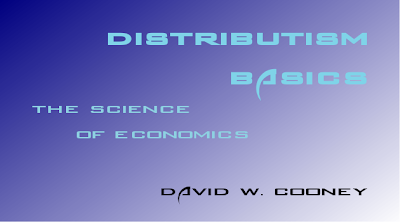 There seems to be a theory, popular among the critics of distributism, that distributists either don't understand the science of economics, or that we don't believe economics is a science. To listen to them, we don't accept the laws of supply and demand, scarcity, the theory of diminishing returns, or the many other aspects of the science of economics. This, of course, is nonsense.

Let me perfectly clear. I don't deny that those things are part of economics. Where distributists disagree with our (typically capitalist) critics is in precisely what kind of science economics is, and how each of those aspects of economics is to be viewed in relation to other aspects. Why is it that, prior to the economic collapse in 2008, only a minority of the economists predicted the failure? In what other science could the "experts" get away with blaming others when their predictions go wrong while simultaneously declaring that their modeling was correct?

Science is the discipline of applying the principles of reason to evidence in order to reach a conclusion about the cause of the evidence observed. Even when engaging in theoretical fields of science, it is based on the evidence at hand. For any science to hope to be accurate and useful, it must deal with the matter at hand according to its nature. This, in my view, is where the "expert" economists go wrong. The reason I say they go wrong on this point is not because what they analyze in the field of economics is wrong, but because they don't include an important aspect of the nature of economics in their models. That aspect is people.

When I say this, I don't mean that they ignore people entirely in their economic models. If that were the case, advertising would not be a multi-billion dollar industry. However, advertisers know that different people respond to different advertising, and even with their extensive knowledge of behavior, they can make massive mistakes. Why then, do so many economic experts treat economics as though it were a speculative science, governed by rigid laws of nature like chemistry or physics?

Because economics is about a type of relationship between humans, its conclusions must be based on and be consistent with human nature. Economics, therefore, is about how people should behave toward one another when engaged in transactions, no matter how trivial, to provide for their needs and wants. This applies to both sides of any economic transactions, because both the buyer and seller engage in these transactions to provide for their needs and wants. In other words, economics is about ethics, which is the serious and scientific study of acting in accordance with human nature.

A financial deal that looks great on paper may get rejected because of a personal disagreement, prejudice, because one side thinks the deal is immoral, or just because one side wants to hold out for something better. On the other hand, some deals may be taken simply because they will yield a large return regardless of other factors. All of these decisions are economic decisions, but they are based on things that go beyond what economists say is part of the true science of economics. Because of this, economists cannot predict - they are really incapable of predicting - something like a football player walking away from a promising career, being unwilling even to hold out to be vested in the NFL's pension plan. These actions don't fit in their models, but this choice is an economic decision by that player.

While most economists will proclaim that everyone should be ethical in their economic dealings, they still deny that ethics is part of the science of economics. In a way they are correct. Ethics is not part of the science of economics, economics is part of the science of ethics. Economics cannot be separated from ethics because it is a sub-field of ethics. Being ethical in your economic activity is not simply "good business sense," it is an essential and inseparable element of any and all economic activity. This is why the phrase, "it's not personal, it's business," is incompatible with distributism. Economics is a human action that takes place in a relationship between people. It can't be anything but personal.

Distributists don't claim that the failure of economists to accurately predict economic outcomes is because economics is not a science, but because it is a different kind of science than economists believe it to be. Their models fail because they look at people as economic numbers, or more likely because they look at economic numbers without adequately considering the relationship of those numbers to actual people who are more worried about the immediate issues of providing for their families than how a multi-billion dollar company is doing on the stock market. I believe this is why the recent efforts to fix the economy have failed. They gave trillions of dollars to the biggest banks so that they would start lending. They not only failed to see that the people were unwilling to go further into debt, they then blamed those people for the continued failure of the economic recovery. I ask again, in what other science can the "experts" blame outsiders for the failure of their own predictions and still claim that their models are correct? Their models fail because they view economics as a natural speculative science instead of the practical science it really is.

Some will try and argue that this is not real science. They are wrong. Science is the discipline of applying the principles of reason to evidence in order to reach a conclusion about the cause of the evidence observed. The cause of economic activity is human nature; we have needs and desires. We are looking at evidence from the study human nature and the ultimate end for which human nature exists. We are examining particular economic actions and using the principles of reason to reach conclusions, not just about the monetary aspects of the transactions, but if they are consistent with human nature - will they help to fulfill that nature, or hinder that fulfillment. The conclusions are not based on the fads of the current time, but on more than 2,300 years of studying human nature.

Economics is not the science of money and how to get the greatest profit. It is the science of determining how people ought to act in transactional relationships in a way that is consistent with their true nature in order to fulfill their families' needs and wants.

6 - The Nature and Roles of Government