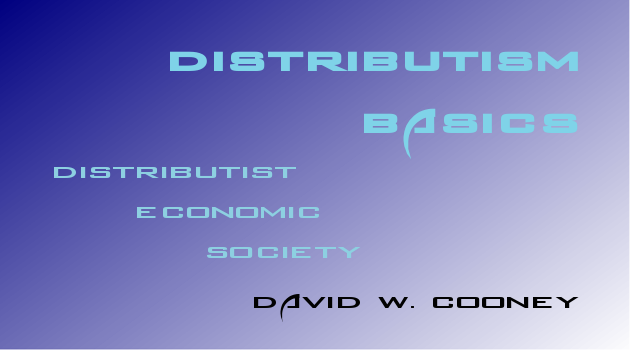 There are two things that must be stated at the beginning of this last article in the series. First is the admission that capitalism could be accomplished in a just way. I affirm the fundamental right to private property and assert that, just as personal freedom is best guaranteed if it includes economic freedom, economic freedom is best guaranteed if the ownership of the majority of productive property in a society is distributed among as many of its citizens as possible. However, I must admit that a form of capitalism that accepted the fact that economics is a sub-field of an ethical system that recognized the primacy of people in society as a whole over personal monetary or material gain could be a just system. It has at least the potential to be one for which there would be few grounds for complaint. The main problem with capitalism is that the philosophical foundation behind it is essentially a utilitarian view which allows people to separate economics from ethics and can result in tremendous injustices for the common man.

Keynesian capitalism attempts to correct these injustices by giving greater authority to the government to help the poor at the expense of the wealthy while leaving as much as possible of the capitalist economic system in place. This has resulted in an increasingly totalitarian state which is "bought and sold" by the wealthy who use the power of government to further their own interests even more than the original capitalists. At the same time government establishes programs to help the poor, it also subsidizes big business and caters laws to the desires of big business even at the expense of the common man. In the end, Keynesian capitalism appears to be taking us on the road to either socialism or the Servile State described by Hilaire Belloc.

The second thing that must be said is that Socialism, despite its noble intent to alleviate the injustices working classes experienced under capitalism, inevitably creates an even more unjust society by denying the right to private ownership of productive property and by turning upside down the structure of political society, allowing the state to interfere with the inner workings of the lower orders of communities to the point of interfering with the very heart of society - the family. It inevitably establishes a totalitarian state and merely transfers the unjust economic power of the very wealthy into the hands of an already unjust state structure.

The goal of distributism is to establish a greater distribution of both economic and political power. As I have stated elsewhere, this is not merely "a new plan." It is an entirely different philosophical view of the relationship between economics and the people and also between society and the people. Because of this, movement from the type of economic and political society we currently have to the distributist view will necessarily be gradual as (hopefully) more and more people accept that view. It will not start from the top of society, it will have to be from the people at the "grass roots" of society making changes on a personal level and then exerting pressure up the levels of society to adapt to what they want for the common good. This should be natural as the higher levels of society exist to serve the lower ones.

In the article on the roles and nature of government, I explained how authority in civil government is structured according to the principle of subsidiarity. That same principle applies to authority in a distributist economic society. The principle function of economics, which means "household management," is to provide for the needs of the family. Even though most economic activity appears to be only indirectly supporting the needs of the family, securing those needs is the fundamental basis without which there would be no economic activity. If you didn't need to secure food, you would not go out to buy it. If you didn't need to earn an income with which to buy the things you need and want from others, you would not need to work to earn that income. It does not matter if you are talking about international trade, interstate trade within a federation or empire, intrastate trade between regions or counties or other communities, or local trade with businesses within your own community, all economic activity ultimately takes place so that individuals can provide for the needs and wants of their families. It is important to keep this in mind, because it seems that many economists forget this very basic point and talk about economics and families as though they are only incidentally related.

Because of this, local orders of society need to have the most control over local economic matters. This is why distributists advocate the guild system with locally owned shops that are directly answerable to the local community. Higher orders of society should not be able to interfere in local economic matters to the extent they currently do. Take, for example, the Farm Bill in the United States. This is a collection of laws at the highest level of political society that directly interferes in local economic decisions. It subsidizes certain types of farm activity - keeping those prices artificially low - and makes alternate farming activity appear inefficient and expensive by comparison.

Why do you think locally grown organic products are more expensive? Why would it be more expensive to not use chemical fertilizers, antibiotics, processes like pasteurization and homogenization, patented genetically modified seeds, warehouse storage, and long distance shipping? Each of these things adds to the cost of production yet the products that use some or all of these things somehow cost less than those that don't. This is because the U.S. government not only subsidizes giant farms that use these processes, it and state governments routinely interfere with the small farms who don't - especially if they dare to offer something like raw dairy products. In a distributist society, federal, state, and even county governments would have less authority to interfere with local economic issues, leaving the majority of the authority with the citizens of the local community who live in and depend on that local economic environment. These are quite capable of devising health and safety standards.

This does not mean that higher levels of society have no involvement. The principle of subsidiarity does not require that. Instead, it provides the grounds for the local community to protect its own interests, thereby limiting the corrupting influence of big business on government policy. Higher levels of government can assist in times of need and even offer guidance, but without taking over.

Other practices that we now consider normal might also be changed to benefit the local economy. For example, zoning laws can be reconsidered so that it does not unnecessarily force people to commute. While it is reasonable for a community to decide that certain types of businesses should not be located near schools or places where people live, there are many types of businesses where I think this makes no sense. Why cannot a baker live in the same building, or at least on the same property, as his bakery? The notion that residential areas must be strictly separated from all business activities is one that not only creates more inconvenience for the local community, it forces a greater expense as prospective entrepreneurs must acquire two properties on which to live and work instead of just one. Eliminating this where practical would not only lower business costs, but it would also decrease traffic by placing many businesses where we work and where we shop within walking distance of home.

5 - The Science of Economics

6 - The Nature and Roles of Government
Posted by David W. Cooney