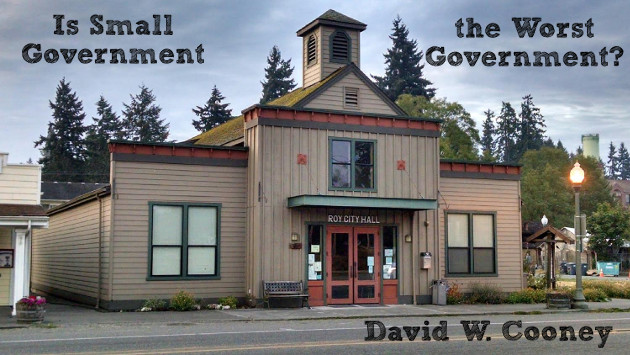 According to an exchange between Chris Hayes and Brian Murphy on MSNBC, small government, by which they mean local municipal government, is actually worse than large government. Referencing an article from New York Magazine, they say that local government is worse because it is less accountable to the citizens. Let's examine their reasons for saying so and see if they stand up to scrutiny.

First, it is in local elections where the individual citizen's vote has the greatest impact. Individual votes are a much higher percentage of the total in local elections than for any higher level of government. Local citizens have a tremendous power to influence local government, including appointed offices, by using not only the threat of kicking elected officials out at the next election, but also the threat of a recall vote before term if they don't address abuses of authority in a timely manner. If the overwhelming majority of a city's citizens wanted a particular change, they are the majority of the local vote, but, unless you are taking about a disproportionately large city, they are nowhere near the majority of all the votes in a county and even less in a state or the federal election. If voting is a means of holding government accountable, then the local government is more accountable to local citizens unless they don't bother to vote. So we need to address why they don't bother rather than tell them the answer is a more remote government which will be less accountable to their local needs because they are a lower percentage of the total vote.

Second, I believe one of the main reasons for low voter turnout in local elections is that local government has been stripped of its natural local authority. I realize that, when referencing abuses of power by local government, giving it more authority seems counter-intuitive, but that is only if citizen involvement in local matters remains low - and restoring authority to local government is a necessary step in improving citizen involvement. Why should we bother paying attention to local politics when higher branches of government have usurped so much authority that they have a greater impact on our daily lives? For many municipalities, even the ability to raise and control revenue for local municipal services is restricted by the state rather than the local community. Just because you have a local property tax doesn't mean that your municipality is getting that money. It may be going to the state which then decides how much of it goes back to your local government. The important decisions that effect our daily lives and even control the effectiveness of our local governments are typically made at the state and federal level with an authority that overrides any local decisions. What those two levels don't handle is often assigned to the counties, again overriding the local authorities.

Third, if low voter turnout is proof that an elected government is unaccountable to the citizens in its jurisdiction, then we must conclude that county, state and federal governments are also unaccountable. Even in presidential elections, where our voter turnout is highest, it remains low. We cannot forget, however the so-called "mid-term" elections which have even lower turnout despite the fact that one third of the U. S. Senate and the entire U. S. House of Representatives are being elected. Why? Because we know intuitively that our individual votes count very little in the overall tally for these high offices. We have also been trained by political campaigns and also the media to look to the highest offices for every answer - and that has led far too many of our citizens to look first to the president for solutions to even local problems. Presidential campaigns have included promises to fix local issues, and it has become routine for the president to get involved in local issues, over which the office has neither a natural jurisdiction nor Constitutional authority, simply because they have gained national attention. We should not be surprised if citizens don't pay much attention to local government when its natural authority has been usurped by every higher level of government in the land.

Reason #3: Uninformed voters
The claim that voters are uninformed about local candidates falls into two categories: voters don't know the local candidates and they vote only by party affiliation. The reporters claim that voters frequently don't know the names of candidates prior to seeing them on the ballot. However, for many people I've encountered, the only reason they know the names of federal candidates prior to seeing them on the ballot is that they've been bombarded with fliers and commercials. Political parties spend much more on state and federal election campaigns than they do for all of the local campaigns. Other than name recognition, the actual positions of many candidates for state and federal level can remain unknown to the average voter who will vote along party lines for those offices just as reliably as they do for the local ones. It is true that many people cannot name the mayor or members of the council for their local municipal government. It is just as true that, within a few months of an election, those same people cannot name their state representative or senators, or their federal representative.

Reason #4: People in office stay in office for a long time
If longevity in office is a sign that local municipal government is unaccountable to the voters, then the long years of incumbency for federal offices also proves the same for the federal government. This is true for both elected and unelected positions.

Reason #5: No one shows up to city council meetings
Exactly how many citizens show up to county, state, and federal legislative meetings? What percentage of citizens within a county jurisdiction show up to a county council meeting compared to the local municipal council meetings. It may be that part of the reason for low turnout at city council meetings is that, even when they are held in the evening, citizens are still stuck in traffic on their commute home when those meetings occur. However, state and federal legislative sessions are not only held during the work day, but are far too remote to be attended by the overwhelming majority of citizens governed by their legislative power. Maybe if the local government was more empowered to handle local matters, local citizens would take a greater interest and attend their council meetings. This just doesn't seem to occur to misters Hayes and Murphy.

However, it is at the local level where the vote of the individual citizen has the greatest effect. If local municipal governments had the authority to manage local matters, if they weren't put in a state of dependency on state and federal monies for certain issues, if the local citizens could establish policies catered to their local needs without being overridden by higher levels of government, then it is likely that people would pay more attention to their local municipal government than they currently do for the higher levels. If they were doing that, then they could address issues of unaccountability at the local level, where they have the greatest voice.

At the local municipal level, the individual citizen may only be one voice among anywhere from several hundred to several thousand. If this seems like it is a small percentage, it is actually very large when compared to the tens of thousands to millions of voices wanting to be heard at the county, state and federal levels. It is easy for the holder of a higher government office to respond that he must answer to his overall constituency as a means of dismissing the concerns of a single citizen, or even a group of citizens. It would not be so easy for a politician to do this at the local municipal level.

The solution to an unaccountable government is subsidiarity. When authority over local matters is handled by local municipal government, when the decisions that have the most impact on our daily lives are handled at the local level, then the people will have the motivation to pay attention to what the local officials are doing, to attend city council meetings, and to vote in local elections. If this was the case, the accountability of local government would be far greater than citizens could ever hope to achieve for higher levels of government.

Is Distributism Liberal or Conservative?