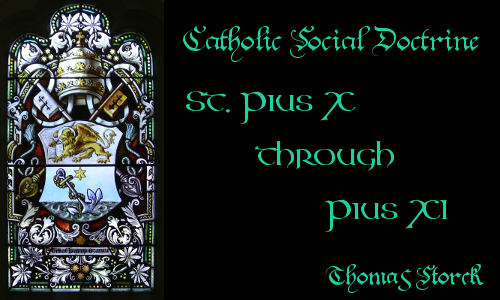 In the last article in this series I spoke of Leo XIII, and especially of his great encyclical Rerum Novarum of 1891. Leo XIII was the first pope to systematically evaluate modern economic conditions in the light of the teaching of the Church, and the tradition he began has continued and developed to this day. In this article, I will cover the period from the reign of St. Pius X (1903 to 1914) to Pius XI. During this time successive popes developed the doctrine of Rerum Novarum according to the needs of the time, in particular in the encyclical Pius XI issued commemorating its fortieth anniversary in 1931.

Pius X, the immediate successor of Leo XIII, did not issue any encyclical that is usually classed as a social encyclical, but his activities in that regard are still worthy of note. Long before his elevation to the papacy, while still a parish priest, he took a lively interest in both the spiritual and temporal needs of his flock, and, for example, helped to found cooperative banks or credit unions, so that his parishioners would have a safe place in which to put their money, as well as access to necessary credit without having to resort to usurers. And in his encyclical of 1910, Notre Charge Apostolique, in which he condemned a sincere but misguided French social movement called Le Sillon, St. Pius exhorted the bishops of France to “take an active part in the organisation of society” so that “all men of good will” may “attain their legitimate share of temporal happiness.”

Pius’s successor, Benedict XV (1914-1922), reigned during the First World War, and was occupied chiefly with the war and its aftermath. He greatly assisted refugees and others threatened with starvation by the war, but, preoccupied with these matters, did not issue a social encyclical.

Next was elected Pius XI (1922-1939), in my opinion one of the greatest popes of this century. His encyclicals cover many subjects including the kingship of Jesus Christ, Christian marriage, Christian education and communism. He was the first pope to solemnly condemn birth control, in the encyclical Casti Connubii of 1931, and introduced both the Feast of Christ the King and the Feast of the Holy Family into the Church’s calendar and liturgy. He was also very active in the social apostolate, and in many ways his chief social encyclical, Quadragesimo Anno of 1931, remains the major source for all subsequent papal social teachings.

So clearly did Pius XI realize that the Church’s social doctrine was an integral part of the Gospel, that he touched on such matters even in his encyclical on Christian marriage. Toward the end of that encyclical, after pointing out the temporal needs of large families and poor families, the Pontiff wrote,

Wherefore, those who have the care of the State and of the public good cannot neglect the needs of married people and their families, without bringing great harm upon the State and on the common welfare. Hence, in making the laws and in disposing of public funds they must do their utmost to relieve the needs of the poor, considering such a task as one of the most important of their administrative duties (§121). [1]


Leo XIII had clearly recognized that at times the state authorities would have to act directly on behalf of social justice, but here as elsewhere, Pius XI develops Leo’s teaching by making more explicit what was less clear in Rerum Novarum.

Pius’s great achievement in the social field, however, was Quadragesimo Anno, issued on the precise day, May 15, exactly forty years after Rerum Novarum.

And so ambitious was the Pope’s goal in this encyclical, that in truth, the Catholic world has not yet assimilated, let alone implemented, its teaching. Though papal encyclicals are usually known by their opening Latin words, each encyclical has a formal title of its own. The title of Quadragesimo Anno reads in part, “On Reconstructing the Social Order and Perfecting It Conformably to the Precepts of the Gospel”! Such a reconstruction of the entire social order is obviously a gigantic task, and it is not surprising that even Catholics have often shrunk from the hard work that would be required were we to attempt this. And as we look at the contents of this encyclical letter, we will be better able to see what is entailed bv such an undertaking.

Since the occasion of Quadragesimo Anno was the commemoration of the fortieth anniversary of Rerum Novarum, Pius XI devotes the first part of his encyclical to giving some of the background of Leo’s encyclical and the benefits that have resulted from it. He reminds his readers of the harsh conditions which the workers, “oppressed by dire poverty,” experienced at the end of the nineteenth century. Leo’s teaching, however, gave new hope to the workingmen, “who felt themselves vindicated and defended by the highest authority on earth” (§13). Moreover, after the encyclical’s issuance, Catholics, both clerics and laymen, and even some non-Catholics, began to promote and implement its teaching in various ways. For example, before Rerum Novarum, most rulers and governments felt that they must restrict themselves to being “mere guardians of law and order.” Pius goes on to comment:

We do not, of course, deny that even before the Encyclical of Leo, some rulers had provided for the more urgent needs of the working classes, and had checked the more flagrant acts of injustice perpetrated against them. But after the Apostolic Voice had sounded from the Chair of Peter throughout the world, the leaders of the nations, at last more conscious of their obligations, set their hearts and minds to the promotion of a broader social policy (§26).


Moreover, “not a few recent laws dealing with social questions were originally proposed to the suffrages of the people’s representatives by ecclesiastics thoroughly imbued with Leo’s teaching” (§27). As a result there grew up “a new branch of jurisprudence, “concerned to safeguard” the soul, the health, the strength, the housing, workshops, wages, dangerous employments, in a word, all that concerns the wage earners, with particular regard to women and children” (§28).

Next Pope Pius takes up the question of labor unions, and points out that in the nineteenth century governments often,

regarded…unions of workingmen with disfavor, if not with open hostility. While readily recognizing and protecting similar associations among other classes, with shameful hurt they denied the innate right of forming associations to those who needed them most for self-protection against oppression by the more powerful (§30).


But again, Rerum Novarum helped to change this.

It must be set to the credit of the Encyclical that these unions of workingmen, have everywhere so flourished, that in our days, though unfortunately still inferior in number to the organizations of socialists and communists, they already muster an imposing body of wage earners able to maintain successfully, both in national and international assemblies, the rights and legitimate demands of Catholic laborers, and to assert the saving principle on which Christian society is based (§36).


Even from this first part of the encyclical Quadragesimo Anno, one can learn something of Pius’ teaching on social and economic matters. The necessity for some state intervention in economic matters, the positive role of unions – though all these are mentioned in Rerum Novarum, they are made more explicit here. This is a legitimate development of doctrine, not denying anything that was authoritatively said in the past, but, in response to new questions and conditions, bringing out the implications of earlier teaching.

After this introduction, Pius proceeds to the second part of Quadragesimo Anno, in which he will “develop as regards certain points the teaching of so great a master on social and economic affairs, after vindicating it from some doubts which have arisen.” He begins this part by reasserting the authority of the Church, and especially of the Sovereign Pontiff “to deal authoritatively with social and economic problems” (§41). His statement here ought to be sufficient to silence those who have sometimes claimed that popes have no business speaking about such matters. Any who voice such opinions are wrong, not because the Church has authority in “technical matters,” but because many economic questions are really moral questions or are intimately related to moral questions. I discussed this point at length in the first article in this series.

Next Pius XI takes up the question of property. He, of course, upholds the institution of private property, but he also expands several points made earlier by Leo XIII. He points out that different societies have had different notions of property, and that while the government has absolutely no right to abolish private property, nevertheless because property has a social as well as an individual character, there is a role for the state in making clearer the social duties of property (§46). He says on this:

However, when civil authority adjusts ownership to meet the needs of the public good it acts not as an enemy, but as the friend of private owners; for thus it effectively prevents the possession of private property, intended by Nature’s Author in His Wisdom for the sustaining of human life, from creating intolerable burdens and so rushing to its own destruction. It does not therefore abolish but protects private ownership, and far from weakening the right of private property, it gives it new strength (§49).


One can see from this discussion, that the Church does not teach a right of private property that is absolute. Property also has duties toward the common good. Although Pius XI does not mention them, zoning laws would be one example of laws which, as he puts it, “specify…what is licit and what is illicit for property owners” (§49).

After this, the Pontiff discusses wages. Leo XIII had devoted a large section of Rerum Novarum to wages, and had taught that they must be sufficient to support the wage earner and his family “in reasonable and frugal comfort.” Pius XI reaffirms this teaching, but he goes further, and says that in the past too much of the profits of business and industry have accrued to the rich: “Capital…claimed all the…profits and left to the laborer the barest minimum…” (§54).

Every effort, therefore, must be made that at least in future only a fair share of the fruits of production be permitted to accumulate in the hands of the wealthy, and that an ample sufficiency be supplied to the workingmen (§61).


Here, as in many other points of their teaching, one can wonder whether the popes’ commands have yet been put into effect.

In the next article, I will conclude our survey of Pius XI’s social teaching.

Also published by
The Distributist Review on 30 August, 2010