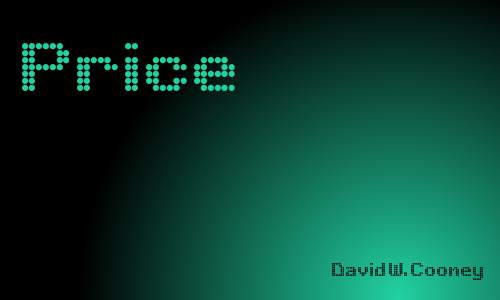 
I have presented in several articles that distributism is not just another way of juggling numbers in an attempt to make sense of economics. Just as capitalism and collectivism are fundamentally different ways of envisioning the economic and political environment of a society, distributism is yet another way that is fundamentally different than those views. Some people think that distributism is an attempt at a "middle ground" or blending of capitalism and socialism. In fact, such a blending will result in what Belloc called the Servile State - something entirely different than what distributism hopes to achieve. It can be difficult for distributists to appreciate just how fundamental these differences in economic views are, and that makes it difficult to appreciate just how much of a change we are asking of those we are trying to convince. We face tremendous obstacles in trying to establish even some of what distributism proposes. I would like to present an example of this by considering the concept of price, and the difference between the capitalist "market price" the masses have been taught to accept, and the distributist "just price" we are trying to help them understand.

It is always easiest to hit the safest target. For distributists, as for collectivists, that target is "the rich." The rich are small in number, but so are we. It is easier, and less costly, for them to dismiss us as kranks than to come after us. Yes, we do need to reach them, but most in that category will remain effectively out of our reach unless and until the overall situation in our economic and political society experiences significant change. Accomplishing this change is our goal, so we must address those who don't fall into the category of "the rich."

These others, the so-called "poor" and "middle" classes are, for the time being, our primary audience. Even if they don't fully understand our positions, most are in agreement with us in criticizing the rich for things like price gouging, subsistence wages, poor treatment of workers and buying off the government. However, we need to keep in mind the attitudes and actions of the rich are not the only ones that need to change in order to make society more economically and politically just. In order for distributism to even start, let alone succeed, we must also go after that much bigger, and much less safe target - the attitudes and actions of the masses of the proletariat.

I was recently on a walk with a friend and he took the role of Devil's Advocate against the possibility of achieving the goals of distributism. He brought up the usual arguments regarding the ability of those who own and control the means of production to use their economic power to pervert the economic process and corrupt the government that should protect the people from such things. However, whether or not he realized it, his strongest argument by far had nothing to do with them. Most of his points ultimately rested on the attitude of the masses of those who do not own or control any means of production, and who effectively have no means to support themselves and their families other than employment - the proletariat. This attitude of the proletariat can be summed up as, "If I can get the same thing you're selling for a dollar less from someone else, I'll buy from him."

This is the reality we face. The proletariat masses we are trying to address don't see the problem of having price be the principal factor in their own economic decisions. This attitude is not necessarily their fault. They've been raised in a predominantly capitalist society. They've been educated in schools run by a government that is beholden to capitalist economic power. Other than exposure to some collectivist views in school or at home, what else do they know? By and large, they have been trained all their lives to be proletariat employees, and those who truly accept this training might be allowed to manage their fellow employees in large companies owned by the capitalist class. While most of them consider themselves capitalists, by which they mean they are convinced that capitalism is the best economic system, the overwhelming majority of them will never actually become part of the capitalist economic class - those who own and control the means of production used to provide their economic needs. They accept, by training and habit, their role in what my friend called the "socio-capitalistic feudalism" under which we live. They are the main part of the proletariat we are hoping to convince, and they've never been given the tools to adequately understand the full implications of the points we are trying to make.

People are generally okay when you talk to them about how others are the problem, and how those others need to change. It is much more difficult to get them to consider whether their own attitudes are a significant part of the problem and may need to be adjusted in order to resolve it. If we disregard its fairy-tale ending, the 1998 movie, You've Got Mail, provides a very realistic example of what I mean. This example has nothing to do with the main characters who owned competing shops in the neighborhood, but with those characters who represented the customers. While this is a fictional story, this aspect of it is very real and there are countless examples of it in the real world. The reality is that the same people who decried the big shop moving in and putting the small shop out of business played a major part in the small shop going out of business - and the reason was that they viewed price as the supreme principle in their economic decisions.

In the story, the small shop had been there for generations, it was a loved and cherished part of the community, it did not just provide products to purchase, but personalized service based on the fact that those in the shop and the customers were long time friends and neighbors. The customers were never dissatisfied with the shop or with its prices, the employees provided good service and were paid accordingly. In fact, if you look at this from the perspective of basic market-based economics, there was nothing wrong with this small shop. Its very success showed that it paid market wages and charged market prices according to the means and wants of its customer base. This is a very significant point. The customers who were ultimately responsible for the shop's failure didn't switch to the big chain shop that moved into the neighborhood because they could not afford the prices of the small shop. They were very happy with the small shop just as it was.

At first, when the big chain store opened, these customers were loyal. The new store didn't provide the kind of service they liked and the employees weren't as knowledgeable or as helpful. The only thing the big chain store had going for it was price. The same people who admitted they didn't like the business style of the big store, didn't like the lack of personal service, didn't like the fact that the employees were not as helpful to their needs, and didn't want the small shop to close down because it provided what they did like, became customers of the big chain store and did so solely on the basis of price. Again, this is a fictional story, but it reflects the reality that distributists face when trying to address the real people these characters represent. These customers are part of the proletariat class and they live and act with the mindset of that class. They have been trained to believe that they are being cheated if they don't get the lowest possible price, and not to think about why some prices are lower than others. They have been trained not to think about the inconsistency they show when they decry the loss of local businesses for which they were an instrumental part in shutting down. They want a thriving local community, but don't see how their own decisions and actions work toward its disintegration.

For many of them, they have been trained to aspire for nothing further than stable employment at a wage that will satisfy their needs. It is not the case that none of them could own their own shop, many could manage it and be successful. The problem is that they believe that having the overwhelming mass of the people be employees of a wealthy minority is just how things work. They don't just believe that there is nothing wrong with the situation, they believe it is a positive good. They believe the lie that this is how economics always has worked and the only way economics really does work. They regret when they see a local shop close down, but they also believe it was simply inevitable, so why fight it? "Even if I continue to go to the small shop, my doing so will not stop the inevitable from happening, so I might as well save a few bucks while I can."

What alternative does distributism offer to this? Since we don't advocate government confiscation or forced redistribution, the changes we propose will take time to occur. In the mean time, the situation of the small versus the large shop will continue. We know that it is unlikely that the changes we propose will take place in the near future, so we are asking them to act for the future. Even more, we are asking them to act with the knowledge that the full benefit of what they will do will likely only be realized by future generations. We are asking them to take on a whole new attitude about economics, government, and their role in society. We are asking them to abandon the proletariat mindset and to take risks - even if it is just the risk of continuing to support the small shop as long as it manages to last. Convincing them of this requires more than simplistic platitudes against the rich.

Until they begin to see all of this, the proletariat will remain content to be proletariat. They won't truly consider themselves as more than employees and won't consider the full implications of how their economic decisions are just as much, if not more, a determining factor in the success and failure of small businesses. They won't think to examine the costs, both economic and social, of how some low prices are achieved, they won't consider the difference between what they have been told is the "market" price and a just price. Until we can help them understand that it just may be the case that they are being cheated and manipulated by the lowest price, the lowest price will remain their primary consideration when making economic decisions.