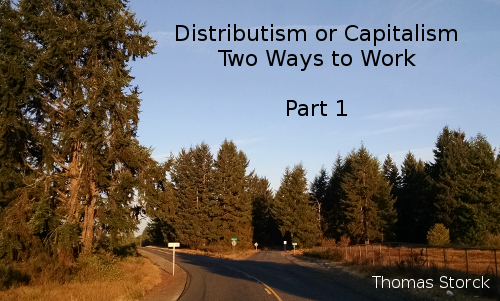 When human beings engage in economic activity they engage with other people. Even a gardener cultivating his own small plot has probably obtained his seeds and his tools from others and at least depends upon the larger society for the social stability that allows him to plant his garden with a reasonable expectation that he'll be able to harvest his crop later. But most often economic actors relate in many more obvious ways with others, with employees, with customers, with those we call competitors, and in a sense, with the general public or society itself. Each way of organizing economic activity, each economic system, necessitates or at least makes probable certain ways of interacting with these other persons and groups. Let us examine the contrast between how capitalism and distributism do this. But first, how do we define these two economic systems?

Capitalism, as I use the term here, refers to "that economic system in which were provided by different people the capital and labor jointly needed for production" (Pius XI, encyclical Quadragesimo Anno, #100). In other words, under capitalism, for the most part those who own the means of production hire others to do the actual work. Sometimes the capitalist owner manages the enterprise, but in its most extreme version, the corporation, the legal owners do nothing except collect their dividend checks or watch their stock prices rise or fall. They hire others to do the work of the corporation, including managing it. Many of these owners are not even real persons, but mutual funds or pension funds, and, in the back and forth of stock market transactions, they may own a particular stock for only a few minutes.

Distributism, on the other hand, is a way of organizing society's economic activity so that, as much as is feasible, the means of production are owned by those who actually do the work, whether that means small enterprises run by a single proprietor or larger ones that are employee-owned. In some small enterprises, it is true, younger workers during a period of apprenticeship may be paid a wage, but they work with the owner, not simply for him, and the expectation is that these apprentices will eventually be able to set up their own businesses or workshops, or be part owners of a larger employee-owned firm.

Let us now look at the contrasting effects these two economic systems have on the various persons and groups I mentioned above, and in the first place the workers. In a capitalist enterprise employees are always an expense, something in the balance sheet that takes away from profits. Thus there is an obvious incentive for owners to cut labor costs as much as possible, by keeping wages low, weakening or destroying unions, moving production to low-wage areas, weakening costly workplace safety measures, etc. Although in itself there is nothing unjust about a person hiring someone to work for him - provided a just wage is paid - the entire tendency of a capitalist enterprise and of a capitalist economy is to drive down labor costs. Even if an owner is determined to pay his employees a just wage, it can take heroic virtue to do so when all other firms are cutting wages, for as Pius XI also pointed out in Divini Redemptoris, often "under the salary system...individual employers are helpless to ensure justice" (#53). Sometimes even the continued existence of a firm can be endangered when an owner refuses to violate his duties toward his employees, since his own production costs will exceed those of other producers.

What is the case with distributism? Whether we are speaking of individual owners of farms or shops or small workshops, or of larger employee-owned entities, in a distributist enterprise the employer/employee divide hardly exists. In medieval distributism an owner usually employed others to assist with his work, but these others were in training as apprentices or journeymen and eventually would establish shops of their own. They were not expected to remain employees for their entire lives. Moreover, they were protected from exploitation by guild regulations. Today whenever an enterprise requires a number of workers greater than a handful, a better way is for the firm to be owned jointly by all the employees. This is equally distributist, and seems better suited for both modern technology and modern economic conditions. The point is, however, that whether the firm is owned and operated by one man or owned and operated by a larger number of employees, these individuals do not see their own compensation as an expense to be reduced as much as possible. Rather they are apt to see their salaries or wages as one of the reasons that the firm exists. There is no built-in conflict of interest as there is with capitalism, rather an identity of interests among all the members of the enterprise.

Next let us look now at the relations of the firm to its customers. Let me begin with a quotation from Hilaire Belloc.


But wealth obtained indirectly as profit out of other men's work, or by process of exchange, becomes a thing abstracted from the process of production. As the interest of a man in  things diminishes, his interest in abstract wealth - money - increases. The man who makes a table or grows a crop makes the success of the crop or the table a test of excellence. The intermediary who buys and sells the crop or the table is not concerned with the goodness of table or crop, but with the profit he makes between their purchase and sale. In a productive society the superiority of the things produced is the measure of success: in a Commercial society the amount of wealth accumulated by the dealer is the measure of success.[1]


Here we see one of the best accounts of what other writers have called the spirit of capitalism. Someone who views the enterprise as simply a means of making money, who has little personal interest in creating quality products for their own sake, tends to view customers or potential customers, not as persons for whom the enterprise provides a necessary service, whether that is providing bread or computers, but merely as sources of income. In other words, there is a shift from regarding customers as those in need of some necessary or beneficial good, and from whom certainly a fair exchange is to be expected, into simply someone to whom something can be sold, regardless of whether it is needed and regardless of the quality of the item sold.

It is true, of course, that a capitalist producer usually has some regard for the quality of his products, otherwise he often could not convince people to buy them. But his real concern is with "the profit he makes between their purchase [or manufacture] and sale." Thus the ubiquitous presence of advertising as a means of persuading people to buy products, whether needed or not, whether of good quality or not, even whether harmful or not.

In a distributist economy, on the other hand, producers or manufacturers generally have some personal or professional regard for the quality of the product itself. They are not interested simply in how much money they can make, regardless of whether the product is of poor quality or not. Of course a distributist producer could have the same sort of attitude that capitalism fosters, but this is much less likely. Not only is a distributist producer more intimately engaged with his product than his capitalist counterpart usually is, but distributism does not have the built-in incentive which encourages producers to concentrate simply on profits, with as little care for product quality as is compatible with revenue from sales. Under distributism producers tend to see themselves as supplying some need of the public for which, of course, they expect to be adequately compensated. But their aim is serving the public, not increasing their incomes by any possible means.