Futures Markets and the Absurdity of Capitalism 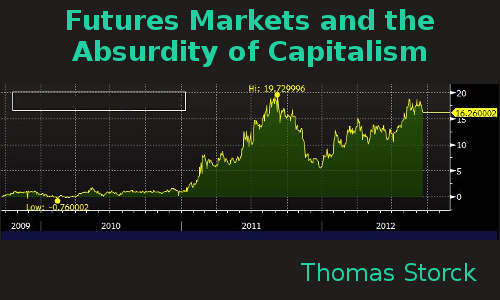 Capitalism is often celebrated by its supporters as the only economic system that can really deliver the goods, the only way of arranging our economic activity that has or that can lift mankind out of its supposedly otherwise inevitable poverty. And it is the case, one must admit, that capitalism does act as a remarkable spur to the manufacture of stuff, all kinds of stuff, sometimes useful, but just as equally useless or even harmful - anything, in fact, that the producer thinks can be marketed. But production of goods, even useless goods, is not the hallmark of capitalism. Rather capitalism, understood as the separation of ownership and work, has as its unique attribute not production, but selling, even, as we are about to see, selling of things that really do not exist.

The human race has always grown or otherwise gathered food, and there has probably always existed some kinds of exchange. But the growing or obtaining of food and the exchange of one desired object for another was always seen as a subordinate part of the life of the human race. Obtaining food was for the sake of living, exchange was for the sake of living better. But with capitalism this common-sense relationship of means and ends is very often perverted. Now all production is for the sake of exchange, social life becomes subordinated to the processes of production and exchange, and they in turn become subordinated to more exotic economic practices. This is because the capitalist imperative is always more sales, more profit, more speculative ways of making money, without any inherent limit or even a notion of what all this activity is for, except for the enrichment of those who own or control the economic processes. Capitalism as the separation of ownership from work creates a class of individuals who are removed from the production of useful objects and who regard the objects produced as primarily commodities to be sold, rather than useful goods to be consumed. Hence the imperative for more sales, ever increasing profits and market share, regardless of demand, because there is no natural limit, no end for which one is striving and with which, when obtained, one is satisfied. Let us look at the interesting example of the futures market in grain and see what we can learn from it as to the nature of the capitalist approach to organizing an economy.

In his book, Nature's Metropolis: Chicago and the Great West, William Cronon discusses among other topics how the grain trade gave rise to the futures' market in agricultural products. This account shows the absurdity of economic activity divorced from any rational end, and eventually even from a real product, the purposeless kind of economics fostered by capitalism. As long as something makes money for those who own or control it, capitalism cares nothing for whether the activity actually contributes anything toward meeting mankind's real needs for goods and services.

Originally, as has generally been the case with mankind, grain grown on the prairies of Illinois and neighboring states was a means of feeding the farmer, his family and his near neighbors. But as it became an item to be shipped and sold, and eventually turned into a commodity future at the Chicago Board of Trade, we can see the transformation of a human and natural object into the abstraction of a commodity, something regarded as merely a means of profit.

A certain amount of grain trading and shipping existed from the early 19th century using water transportation. But this was slow and awkward and did not reach every place. Before there could be a transformation in the understanding of grain, there had to be a more efficient means of transportation. This was provided by the railroads, which were built mostly to facilitate the capitalist imperative to totally commercialize every aspect of life. If people had thought of grain as primarily a food to be consumed pretty much where it was grown, then the huge railroad network of the Mid-West would probably never have come into existence, since the existing modest means of transportation would have sufficed. Thus to extend and fully implement the capitalist transformation of wheat from a food into a commodity, the railway system first had to exist. The building of the railroad network transformed not only food exchange, but the environment, both natural and cultural of the region and the nation. Capitalism, then, both building upon and transforming the human vice of greed, powerfully shaped the entire culture and violently captured such pre-capitalist aspects of society as food production and local exchange and bent them to its purposes.

The existence of the railroad network enabled farmers to conceive of themselves not as growers of food for consumption but as producers of a commodity. Grain was shipped via the railroads to Chicago where it was held in large grain elevators for eventual shipment to the East coast. Originally the ownership of any particular sack of grain was retained by the farmer who harvested it. But naturally sacks of grain differed from each other significantly in quality. The storage of these sacks in grain elevators created a problem: "elevator operators began objecting to keeping small quantities of different owners' grain in separate bins that were only partially filled.... To avoid that..., they sought to mix grain in common bins." To do this required some system of grain standardization or grading. After such a system was created it became possible for the elevator owners to contract for sale of a certain quantity of a certain grade of wheat, with no reference to any particular sack of wheat actually existing anywhere. But because of the ever-changing price of grain, sellers and buyers soon realized that they could essentially bet against the future price by contracting in the present for sale or purchase of a definite quantity of grain at some future date, hoping that the price would increase or decrease to their benefit by the time of the actual sale. Ultimately this created the final absurdity:


...futures contracts [which] were essentially interchangeable and could be bought and sold quite independently of the physical grain... Moreover, the seller...did not necessarily even have to deliver grain on the day it fell due. As long as the buyer was willing, the two could settle their transaction by simply exchanging the difference between the grain's contracted price and its market price when the contract expired. [They] could complete their transaction without any grain ever changing hands.... The futures market was a market not in grain but in the price of grain...one bought and sold not wheat or corn or oats but the prices of those goods as they would exist at a future time. Speculators made and lost money by selling each other legally binding forecasts of how much grain prices would rise or fall.

Grain went from being a means for feeding the population of farmers and others who lived nearby, to being centrally stored in bins in Chicago and shipped throughout the Northeast United States and into Canada, into being merely a symbol, but nevertheless a symbol that enabled speculators to engage in exchange. The contracts themselves have become a commodity to be bought and sold, but the contracts now have no necessary connection with any object of real economic value.

Despite its claim to be the only economic system that can produce sufficient goods to satisfy mankind's needs, capitalism is really not interested in production at all, except as that can serve sales. It is interested in moneymaking, to be sure, but moneymaking by nearly any means that one can concoct. It might seem obvious, for example, that the financial sector would be a modest adjunct of the more primary economic activities of production or even exchange, sometimes necessary, often helpful, but always subordinate. But frequently someone can make more money by a merger or buyout, which often results in a decrease in real economic activity, than by actual production.

It should be obvious that mankind's economic activity exists to serve our need for external goods and services. Thus economic activity must always be subordinate to the genuine needs and interests of humanity. But when economic activity is seen as basically a means of getting rich by almost any method, it is apt to become entirely divorced from meeting our real economic needs. The economy becomes essentially a private playground for those with enough skill or money to manipulate it in their favor. Pope Pius XI wrote with regard to such types of economic manipulation, "A stern insistence on the moral law, enforced with vigor by civil authority, could have dispelled or perhaps averted these enormous evils" (Quadragesimo Anno, no. 133). But this is too rarely the case in a capitalist, commercial society, where indeed as Karl Polanyi noted, "society itself becomes an `adjunct' of the market."