Why Unemployment is a Pseudoproblem - Part 2 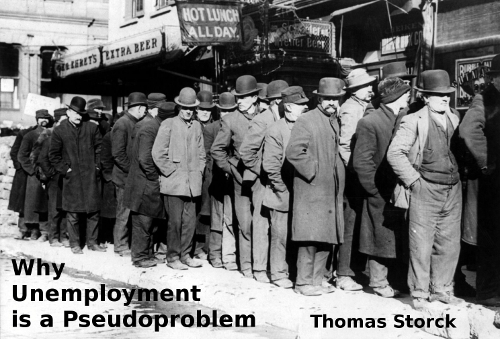 
Next let us look at the question of cyclical unemployment, that type which comes about "when the overall demand for labor is low" because of a business cycle downturn. I am afraid my argument will seem hopelessly naive to most economists. But that does not mean that it is wrong, only that the elaborate superstructure that economists have erected over the past couple centuries tends to obscure some obvious economic facts.

God created human beings with both the capacity for work and the need to consume. In fact, these two characteristics balance one another in that anywhere there are people, there are both producers and consumers. Thus it would seem that everywhere people can do the work which supplies them with the goods they need. The human capacity for work corresponds roughly with our need for the products of that work. The more people, the more workers, the fewer people, the fewer workers. What does this have to do with the question of unemployment? If in general each person is able to perform productive work sufficient to supply at least his own needs, then why should anyone be idled, unable to work? Does not each person create his own demand and at the same time provide the means for supplying that demand?

The reason that any particular person's capacity for work cannot be the means of his supplying his needs is usually because he is denied access to the means for production, to land or tools, for example. On occasion a harsh environment makes it difficult to take advantage of mankind's capacity to produce, but in general this is rare. This is not a problem, then, that arises from the nature of human economic activity, it is an organizational problem, one ultimately occasioned by the question of who owns or controls land or tools. The more complicated the relationship between individuals and the means of production, the more likely is some sort of organizational or structural difficulty which impedes people's ability to work and produce. Capitalism heightens this tendency not only by the complexity of its structure, but by creating a class of owners whose primary and direct interest is not in producing for the needs of mankind, but in convincing people to buy their product, whether needed or not, whether well-made or not.

Hence in capitalism there exist business cycles, those alternating periods of boom and bust which are the causes for the cyclical decrease in the demand for labor, and which come about because of capitalism's propensity toward overproduction and speculation. Since the tendency in capitalism is simply production for the sake of sales, not production for the sake of reasonable use, the tendency to overproduce is always present because the capitalist class, people one step or more removed from actual production, have little or no interest in production as such. But under a well-functioning distributism, with a healthy structure of intermediate occupational groups (guilds), part of whose aim is to match economic activity with society's needs, business cycles would either not exist or would be milder and less disruptive.

We can see how the complexity of a capitalist structuring of the economy contributes to the imbalances that create cyclical unemployment if we contrast that with a very simple distributist economy. In such an economy, one in which all workers owned their land and tools and produced whatever was needed for themselves and their families, the immediate connection between work and consumption would be obvious, since each person would be the primary producer of most or all of what he and his family needed, and the one-to-one correspondence between a worker's need to consume and his ability to produce would be obvious. Of course such an economy is hardly possible outside of a primitive level of culture, and in any case is not desirable. The division of labor, though it can be extended too far, has obvious benefits to humanity, and I know of no distributist who opposes it. Indeed, the medieval urban distributist economy assumed and fostered the division of labor up to a point. But what we should note here is that the more complex the connection or relationship between workers and the means of production, the more possibility that a worker will be hindered in the exercise of his ability to produce. Distributism tries to keep that connection as simple as the division of labor and other necessary factors will allow, while capitalism needlessly elaborates that by shifting emphasis from production for fulfillment of human needs, to production oriented toward sales, toward new products that often have little utility, together with a constant preoccupation with higher profit margins, so that capital seeks not merely a sufficient return, but an ever higher one.

Any society and economy that is structured toward man's genuine welfare ought to seek to make use of the obvious connection between the human need to consume and the human ability to work and produce.

This must be kept front and center in our economic thinking, and any needless elaborations and complexities which are introduced into the economy must be eliminated or at least watched carefully lest they create conditions, such as unemployment, which are socially or economically harmful. In a distributist economy the natural relationship between production and consumption would be one of the fundamental principles of its economic organization.

But in addition to the three types of economic unemployment that economists note, there is another type which they are reluctant to acknowledge, or at least to regard as a significant problem. This is unemployment caused by trade agreements. Although the trade facilitated by agreements such as NAFTA can be called free only with numerous qualifications, still it is usually in the direction of freer trade that such agreements lead. Such trade pacts are based on the neoclassical doctrine of comparative advantage, which Paul Samuelson calls "one of the deepest truths in all of economics."[4]

Comparative advantage is based upon a fact, to be sure, that countries excel better at some products than others, and from this it is argued that it is in the interests of all countries to specialize in the products that they can produce most efficiently in order to increase the overall living standard of all countries. While superficially plausible, in fact there are major objections against the theory. In the first place, it treats each country as if it were merely a site for production, ignoring cultural or legal factors. For example, the unique cultural and legal situation of Mexico included Indian villages which held land in common and which in consequence were able to be self-supporting in food. Trade agreements which require land to be freely bought and sold destroy such communities, despite any elegant graphs that economists concoct purporting to prove that everyone will be better off under these agreements. More fundamentally, the theory of comparative advantage assumes that more and more stuff, what is called economic growth, is the summum bonum of human life. Consider Samuelson's discussion of objections to international trade agreements.

But this does not mean that every individual, firm, sector, or factor of production will benefit from trade.... Recent studies indicate that unskilled workers in high-income countries have suffered reductions in real wages in the last three decades because of the increased imports of goods from low-wage developing countries....

Unfortunately, "over long periods of time" most of those unskilled workers will be dead long before they manage to "gravitate to higher-wage jobs," and in the meantime the towns and cities in which they live will be devastated, their families often hurt, social problems will develop, and in general the real standard of living - which is not measured in terms of how much stuff we possess - will decline. The overall amount of available commodities might increase, at least for some people, such as economics professors, but at the cost of buying goods produced by poorly-treated workers in "low-wage developing countries." International trade can be beneficial to all parties, but only if many more factors besides the total quantity of goods produced and sold are considered. Distributism, since it is more than an economic system, would tend to create a society which did not give material goods a greater value than they deserve. As St. John Paul II wrote in his encyclical Centesimus Annus,

It is not wrong to want to live better; what is wrong is a style of life which is presumed to be better when it is directed toward "having" rather than "being," which wants to have more, not in order to be more but in order to spend life in enjoyment as an end in itself. (no. 36)

Mainstream economic thought is based on the idea that human life is not about "being," but about "having," about, as Samuelson avers, producing enough stuff so that "the average American could live at the level of the average doctor or big-league baseball player."[6] This is nothing other than the philosophy of Hell, a point of view opposed to any Christian conception of life. International trade need not create unemployment, but it will do so if it is based on the notion that any increase in the amount of commodities produced, sold or traded, is a good thing, regardless of any effect it has on human life, individual or social.

Unemployment need not exist, or at least, need not be the problem that it so often is in a capitalist economy. If we are willing to rethink economic principles in the light of fundamentals, then we will see that distributism offers a way out of the capitalist orientation of economic activity which diverts it from its natural end of providing for the genuine consumption needs of mankind.