Selling Out: The Perils of Capitalist Small Business 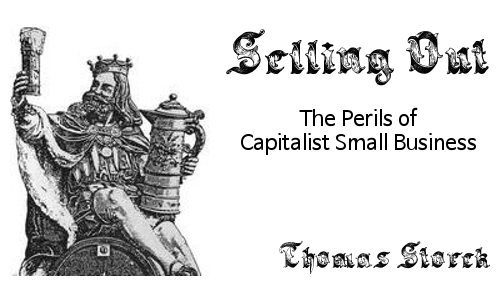 Not too long ago it was announced that Wicked Weed Brewing in Asheville, North Carolina, which had been a craft brewery, was being sold to Anheuser-Busch, the gigantic beer corporation. The founders of Wicked Weed announced optimistically that

It is of course hardly uncommon for a small business in the United States to be bought out by a large corporation. If a small business has a successful or unique product, it seems to some that its natural destiny is to be absorbed by some existing large company, and that this is somehow according to the laws of nature. But although it is very understandable why in a capitalist economy small owners would want to sell out to a big firm, this is a sad effect of capitalism, not some natural law.

As is so often the case with an Internet article, the comments that readers posted illustrate some interesting facets of popular thinking. And in this case they also bring to light some of the difficulties that naturally adhere to small business in a capitalist economy. (Comments have disappeared from the website, but are paraphrased as originally posted.)

In the first place, one of the commenters noted that craft beers are made by people concerned more for the product than for profits. In contrast to this, however, others not only defended the Wicked Weed owners, but defended the principle that selling out to a large company was simply what should be expected. One reader stated that it sounds as if the owners believed in the American dream. Why are people upset about that, he asked. Maybe because they're too lazy to think of something themselves and market it.

Still other commenters offered other kinds of defenses of the founders of Wicked Weed. One noted that the owners deserve to obtain financial security, and along the same lines, someone pointed out that for most people the goal of having a business is selling out to a larger company after years of back breaking 80 hour weeks. And still another stated the undoubted fact that it's difficult to resist when a major company offers to buy you out and make you very very rich.

Now what are some things a distributist can say in reply? First of all, the commenter who spoke of craft brewers as people who cared more for their product than for profits showed a correct understanding of what mankind's economic motivations should be. Although profit rightly understood is a necessity for a business of any size, nevertheless brewers, bakers, and other craftsmen ought to have more interest in their product and their craft than simply viewing it as a means to make money. The money or profit should, in a sense, be a by-product of their work, not its goal. A passage from Hilaire Belloc that I've quoted elsewhere more than once expresses this very well.

But wealth obtained indirectly as profit out of other men's work, or by process of exchange, becomes a thing abstracted from the process of production. As the interest of a man in things diminishes, his interest in abstract wealth - money - increases. The man who makes a table or grows a crop makes the success of the crop or the table a test of excellence. The intermediary who buys and sells the crop or the table is not concerned with the goodness of table or crop, but with the profit he makes between their purchase and sale. In a productive society the superiority of the things produced is the measure of success: in a Commercial society the amount of wealth accumulated by the dealer is the measure of success. [1]


One suspects that the owners of Anheuser-Busch, that is, the stockholders, don't care over much about product quality provided that the accustomed revenues continue. For them it is not a passion to provide good beer, but merely a smart investment, perhaps recommended by their broker as an up and coming stock. The difference in outlook between a craftsman, enthusiastic about his product, and a stockholder perusing brokerage house statements illustrates this immense difference very well.

Let us go on to the other readers who posted comments. The reader who defended selling out to Anheuser-Busch on the grounds that this was a fulfillment of the American dream is a good example of someone who has completely absorbed the capitalist understanding of economic activity. For him economics is not about supplying the needs of mankind with a good product while at the same time earning a sufficient income for oneself and one's family. Instead economic activity is about becoming rich. The product takes second place, indeed, at times the product becomes totally irrelevant, as in the case of someone who makes a fortune by various kinds of financial manipulations entirely devoid of any connection with a real product.

But the other defenders of the Wicked Weed founders have a point. Financial security as well as relief from 80 hour weeks are both legitimate and reasonable desires and goals. Unfortunately under capitalism selling out to a larger entity that probably will have little intrinsic interest in your product is often the only way to achieve such security and relief. But with distributism this is not so. If we accept the basic view of distributism that the economy exists because God has created human beings so that we need external goods and have the capacity to provide them for ourselves, we can begin to grasp that there is something wrong with an economic system in which insecurity, especially for the little guy, is inherent, and which in turn leads to back breaking 80 hour workweeks.

Brewers are meant to supply a real need for the human race, good beer. Of course they must also earn enough profit that they can support themselves and their families. But there is no reason why supplying our need for beer must necessitate either insecurity or 80 hour workweeks. The brewers in any particular locale are not by nature enemies of each other, not even rivals, rather they are cooperators in supplying a need. The medieval distributist urban economy perfected the institution of the craft guilds so that those working in the same trade to supply a public need, such as beer or bread, would cooperate in fulfilling that need. The guilds sought by their regulations and by fostering an atmosphere of spiritual and fraternal unity to prevent any one producer from seeking a larger market share than he reasonably needed or trying to put his brother craftsman out of business. Therefore none would labor under such fear of financial insecurity that he would be impelled to work 80 hour weeks. The guilds, of course, did limit the number of brewers according to the reasonable needs of a locality. They did regulate and restrain competition. But they did this in the interest both of themselves and the public. The brewers needed a reasonable guarantee of stable work, the public a sufficient supply of good beer at a fair price. The guilds aimed to accomplish both, by institutionalizing the natural, God-given equilibrium between human needs and the human capacity to supply those needs.

Now the common capitalist response to this is to claim that, whatever ill effects excessive competition might have, in the long run it guarantees better beer to the consumer. Only when brewers fiercely compete and the better ones win out, will the public be assured of good beer. But does experience support such a notion? It is free competition that has led to behemoths like Anheuser-Busch and to the corporate beer which it purveys. I readily grant that guilds are not free of temptations to abuse their status, to settle into a mediocre routine, but, due to the Fall of our first parents, there is no human institution which is free of the possibility of corruption. If a guild becomes corrupt that is because of the unfortunate corruption of fallen human nature, it is not due to anything lacking in the guild principle itself.

If beer drinkers think that it is craft brewers who offer good tasting beer, and that it is the corporate breweries who offer something less than that, then the question is how to preserve the small brewers without subjecting their owners to 80 hour workweeks and a constant fear of going out of business. The guild system of distributism does exactly that, while the unrestricted competition of capitalism subjects small brewers to the same forces that led to the consolidation of breweries in the first place. If mankind's economic activity is meant both to supply our genuine needs and provide a means of supporting ourselves in a reasonable and human manner, then distributism offers a way of doing that, while capitalism does not. If our dream is to become rich, then we have misunderstood both the purpose of economic activity and why we are placed on the earth in the first place. It is not to become rich but rather to live well so that we can attain to a better life afterwards.