Witt and Richards on Belloc: Part 1 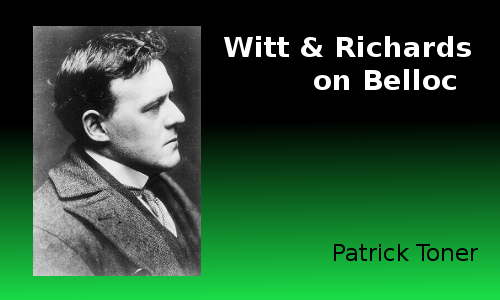 This piece is principally about their treatment of Hilaire Belloc, and secondarily about their treatment of Distributism more generally.  This is admittedly pretty peripheral to their project.  So don’t take this as some kind of review of their book—or even just of Chapter 8.  It’s simply a defense of Belloc and Distributism against some bad objections and some seriously misleading descriptions.
I’ll begin with my chief complaint.  Witt and Richards repeatedly quote this line from Belloc: “the effort at restoring property will certainly fail if it is hampered by a superstition against the use of force as the handmaid of Justice.”  They use this line—isolated from its context and wholly unexplained—to suggest that Belloc envisions armies of “gatherers and sharers” going about, taking your goods by force, and giving them to others.  Frankly, this is outrageous.  I am entirely sure it was not deliberate dishonesty that led to this manifest and egregious misrepresentation of Belloc.  But whatever accounts for the grotesque distortion of Belloc’s position, it remains a grotesque distortion.

Here’s the paragraph in full:

The evil from which we are suffering today is not the evil of State interference but the evil of the loss of Freedom.  State interference may have for its effect a loss of Freedom and certainly usually has for its object the loss of Freedom; but it always may be, and very often must be, invoked for the very purpose of restoring Freedom.  There must be laws to protect property not only against direct rapine but against dissolution through the exaggeration of competition.  There must be State sanction for the powers of the Guild, for the process of Inheritance, for the restriction of undue burdens.  There must be some official machinery for fostering the propagation of small property just as there is official machinery today fostering the destruction of small, widespread property by large owners: and the effort of restoring property will certainly fail if it is hampered by a superstition against the use of force as the handmaid of Justice.  All the powers of the State have been invoked by Capitalism to restore servile conditions; we shall not react against servile conditions unless we avail ourselves of the same methods.  (Essay, 15)


Even more important than this immediate context is what follows.  Belloc goes on in considerable detail to explain his suggested methods for establishing economic freedom.  At no point are jackbooted thugs called upon to go knock you over the head and take your car, your house, your bank account, your retirement savings, or anything else.  The approach is principally through differential taxation (in effect, to hurt the large concerns) and through artificial supports for the small concern.  (see especially p. 35-42)

To understand any of this properly, however, you’ve got to look even more widely and carefully at the Essay.  Think about what Belloc is doing: he is explaining how to move from Britain’s then-current political/economic/cultural situation into a properly Distributist situation.  The practical suggestions he makes are made from within that context, and for the purpose starting from where England then was and moving towards economic freedom.  He couldn’t be more clear about this.  Read the second paragraph of his Preface.  The book is not an abstract consideration of Distributism, it’s a kind of map, from one particular place and time to the establishment of Distributism.  (This means there’s a serious danger involved in thinking one could just apply his suggestions, willy nilly, to our contemporary scene.  It also means there’s a serious interpretive danger in assuming he’d want to do so.)  So, for example—we already have taxes, he says: let’s make them help establish and maintain small businesses, not big businesses.  This is “using force as the handmaid of Justice.”  Again, to see some of how that program was supposed to work in practice, see 35-42.

It’s not actually about income taxes (they, in effect, make that claim on 163), let alone my taking your Aston Martin (see where they—sort of?—make that claim on 164).  I have to say “sort of” because they appear to immediately sort of almost take it back, when they say that Belloc and Chesterton seemed to identify productive property with land and equipment.  (Which, of course, is not true, for at least two reasons, but ignore that.)  So it might be that they’re trying to say, halfheartedly, that Belloc wouldn’t want to take away your Aston Martin.  I don’t know.  But the impression they give, repeatedly, is certainly that Distributists want to take your money and your stuff and give it to other people.

If they had read Belloc, they’d have known he didn’t mean that.  What Belloc talks about taxing is the excessive accumulation of capital.  Capital is not income, though income can become capital.  Capital, according to Belloc, is wealth intended for the production of future wealth, and gotten through saving.  (Economics for Helen, chapter 2)  And so the target of differential taxation is not wealth as such (Belloc doesn’t suggest “divvying up the wealth of the well-to-do,” as though he just wanted to soak the rich or something: see W&R 163).  The target is not even capital as such.  It’s certain unhealthy concentrations of capital.  Take an actual example he discusses:


The motor bus in the country was decentralizing the control of passenger traffic, and the lorry that of small goods traffic, when capitalist monopoly got to work and began to eat up the lesser units which were further persecuted by restrictive laws.  Had a cumulative tax been clapped on to the ownership of more than a few vehicles licensed for country transport, a tax becoming high at half a dozen vehicles and prohibitive at a dozen, we should have continued the small property in transport that was growing up.  (19)

I said above, I don’t mind if Witt and Richards want to contest that Belloc’s views on differential taxation don’t make sense in the modern world, or are likely to have ugly unintended consequences of various sorts, or whatnot, but I would appreciate it if they’d take some trouble to criticize Belloc’s actual suggestions.  There’s a lot to talk about here, and intelligent criticisms of Belloc can be made.  I grant that it’s hard to know precisely how one would apply Belloc’s suggestions to the current situation: consider, just for example, his reflections on irresponsible control (item #4 in Chapter 4).  Things are so far gone down that road that it’s hard to see where to start.  But, as Belloc says (many times), “our effort at restoring property does not aim at perfection nor even at any large universal upheaval of the existing system.  It aims at making a beginning.”  (54)  But Witt and Richards haven’t made those kinds of criticisms.  They’ve made a wholly bogus one.

Now, only if you’re evaluating it from the standpoint of a theoretical libertarian paradise would you imagine that Belloc’s suggestions really require new concentrations of power in the political sector: for in the real world, power is already highly concentrated there.  The government already taxes.  Well, says Belloc, let it tax more sensibly!  The government already oversees certain kinds of licenses and fields.  Well, says Belloc, let it license more reasonably!  He doesn’t propose the establishment of massive new bureaucracies—he proposes that the government stop helping to impose capitalism, and start helping to allow Distributism.  In fact, he himself—granting too much, in my view—accepts that his suggestions would require more bureaucracy, and argues that this would be innocent.  (See pp 37-8.)  But again, he was writing in 1930’s Britain.  It would certainly not require any extension of bureaucracy in our day to achieve his goals.  There is no paradox: no invocation of new political powers in order to fight economic power.  At most there’s an invocation of already-present political powers, redesigned to stop undermining Freedom, in order to fight unjust economic power.  There simply is no paradox.

Witt and Richards also say that Belloc saw the only way to achieve his goals was to “grant power over private property to the national government.”  (161—my emphasis)  The “national” is misleading, especially insofar as their American readers are nearly guaranteed to infer that, if Belloc were to turn his attention to the US, he’d want all this (supposed) new power to go the federal government.  That’s not justifiable at all.  It’s true that because of our massive federal tax apparatus the feds would have to be involved in any schemes such as Belloc defends.  But surely the goal is to have the actual rules made, applied, appealed, defended, adjusted, bent or broken at the local level—at as local a level as reasonably possible.  That, at least, unites Witt and Richards with the Distributists.

The upshot is that there’s nothing paradoxical about the supposed Distributist paradox.