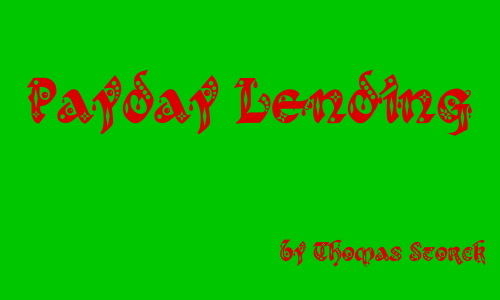 As we approach Christmas, the great feast of our Lord's Nativity, many people are thinking about gift giving. But for many Americans, those with limited incomes and limited savings, gift giving can be an occasion more for anxiety than for joyful anticipation. With little money, some of these people might resort to an extreme form of borrowing to pay for their Christmas giving: payday lending.

Payday lending, as most everyone knows, refers to the practice of charging high interest on short-term loans. Originally these loans were to be repaid on the borrower's payday - hence the name. Although this is not usually the practice today, the name has stuck. In addition there are other forms of lending to those unable to obtain better terms, such as credit cards with very high interest rates or loans that require title to the debtor's automobile as collateral, which while different from payday lending, share in its exploitative character.[1]

Payday loans are typically for small amounts, $300 to $400, and can carry per annum interest rates of 400% or more. Moreover, quite often consumers of payday loans end up rolling over their loans or borrowing again. The Consumer Financial Protection Bureau (CFPB) explains as follows:

Let us examine some of the defenses that are made for such loans.

One defense is that payday lenders fulfill a useful function in that they provide ready credit for those unable to obtain it otherwise. A Fox Business article proclaims, without irony, that


Payday loans may not be suitable for everyone, but they help millions of people bridge a gap during hard times. For example, a recent Federal Reserve survey found that 40 percent of American adults do not have enough savings to cover a $400 emergency expense.

What sort of a defense is this? In this time of supposed prosperity and a low official unemployment rate almost half the adult population cannot come up with $400 for an unexpected expense. So instead of talking about ways to raise the income or savings level of the population, this outrageous statistic is used as a justification for offering loans carrying 300 or 400% annual interest? No one in his right mind would turn to a payday lender if he had any other choice available, so instead of praising those who prey upon the poor by charging intolerably high rates of interest, should not efforts be made to provide credit at reasonable rates instead? In the Middle Ages non-profit institutions known as Montes Pietatis were established by the Church or by local governments to provide alternatives to usurers. The Montes charged only enough interest to meet their expenses, including salaries for employees. They often required a deposit to cover possible default, but the deposit was returned when the loan was repaid in full and on time.[2] In our day credit unions with a focus on small loans could do much of the same work as the Montes did. Although large credit unions often present themselves much like banks, there are many small credit unions, including many sponsored by churches or fraternal organizations, that could fulfill such a role today.

It is said in defense of such loans, moreover, that although an annual rate of interest of 400% would certainly be burdensome, since these loans usually have a maturity of two weeks, the actual interest charged is not burdensome, a mere $45 or so. But considering that the borrower in the first place had difficulty coming up with the few hundred dollars that he needed, and that he now must pay back the principal of the loan plus interest, it seems probable that the interest would in fact be a burden for him. According to the CFPB, "Over 80% of payday loans are rolled over or followed by another loan with 14 days." Thus, as noted above this "means the cost of the original $300 loan, due to the rollover, has gone from $45 to $90." If the borrower continues rolling over the loan because he is unable to pay the principal, then is caught in a continuing debt trap, paying interest over and over again on the same loan, but never able to discharge it.

Again with no sense of irony, another defender of these loans writes on the National Review website that payday lending "looks like a terrible arrangement, until you ask the always-relevant question: Compared with what?" Perhaps compared with getting your electricity or gas cut off in the middle of winter or losing your car, a payday loan is to be preferred. But the argument that seeks to justify payday loans since they are better than any available alternative is like saying that selling your wife and children into slavery is a better option than, say, being tortured to death. The fact that for many there is no better alternative speaks not to the benefits of payday loans but to the bad alternatives available to those with few means in our society.

It is often argued that such high rates of interest are fair because these loans are risky. Borrowers who are forced to resort to payday loans are typically low-income, have little or no savings, may not be skilled at money management, and thus are likely candidates for defaulting on the loan. While this may be true, and while this may justify charging a higher rate of interest than for a credit-worthy borrower, how does it justify the lender keeping this premium when the loan has been repaid? In other words, if one is justly concerned about a loan default and demands high interest on that account, surely there is no justification for retaining or collecting that extra interest if the loan is repaid in full and on time. It is true that if a loan is uncollectable, then the creditor is out the sum loaned. Thus one could argue that it is just to charge all borrowers enough interest to cover defaults if a considerable percentage of debtors do in fact default. Again, this may be true, but does it justify the 400% per annum or more interest which has made these usurers rich? If it were a matter of simply covering costs, then one could make an argument that in view of the risky pool of borrowers, higher rates are justified, but this hardly will justify the actual outrageous interest rates nor immense financial rewards for the lender.

But all these arguments aside, there is one fact which shows that defenders of payday loans are actually hypocrites. This is the Military Lending Act of 2006, a section of the National Defense Authorization Act, Public Law 109-364, which capped loans to active duty military personnel at 36% per annum. Not only was Republican Senator James Talent of Missouri one of its authors, but it received general bipartisan support and the whole bill was signed into law by President George W. Bush. The Department of Defense supported this provision, asserting that financial worries involving high-interest loans were affecting servicemen's ability to carry out their mission.

But - if payday lending is really a benefit to low-income individuals and families, if "they help millions of people bridge a gap during hard times," then was the intent of President Bush and Congress to penalize soldiers and sailors? Why exclude them from the huge benefit of borrowing at interest rates of 400% or more? No, this law was intended and supported as a protection and benefit for military personnel, not as a means of restricting their access to credit. The passage of this law simply shows the utter hypocrisy of those who try to justify payday lending as a benefit for the poor. Rather it is a ruthless preying upon the poor, an instance of grinding the face of the poor, one of the four sins that cry to Heaven for vengeance.

The fact "that 40 percent of American adults do not have enough savings to cover a $400 emergency expense" is not justification for payday loans, it is a call for a living wage, for well-distributed property, for provision of affordable medical care, for a society and an economy oriented toward the common good, rather than our dog-eat-dog vision of society, a vision that is nothing short of a national disgrace.

[1] In order to avoid making this article unduly long, I will omit talking about the theological question of usury as that has been understood in Catholic theology for over a millennium. I refer readers to two other discussions of mine on that subject, the shorter here and the longer here. But it is essential for a complete understanding of the matter to grasp what is Catholic teaching on usury.

[2]  “The amount of a given loan equaled two-thirds of the value of the pawned object, which, if not redeemed within a stipulated period, was sold at public auction. If the price brought exceeded the amount of the loan plus the interest, the residue was given to the original owner.” A. Mc. Padden, “Montes Pietatis,” New Catholic Encyclopedia, vol. 9, p. 834. https://cvdvn.files.wordpress.com/2018/05/new-catholic-encyclopedia-vol-9.pdf
Posted by Practical Distributism