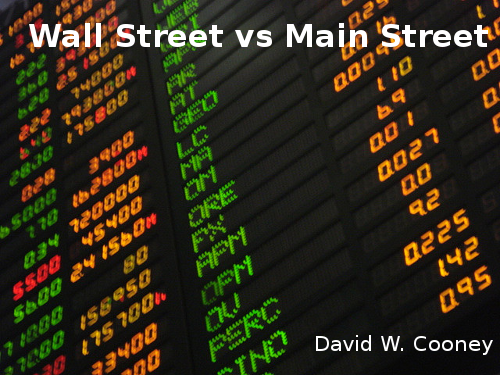 
Stop crying about Fed rate hikes!
So says an article on CNN Money in a comment that is directed at Wall Street. What is most interesting about this comment is that it essentially admits what distributists have been criticized for saying for some time. The economic aims of Wall Street are in conflict with the economic needs of Main Street.

According to the article, a stronger dollar is good for average consumers in the US because it means lower prices. As the dollar gets stronger, people can buy more with what they are paid. Families become more secure and even those with lower income may be relieved of having to choose between paying rent or buying food for their families. For those who are fortunate enough not to face that decision, it means greater opportunity to get luxuries they may have been avoiding due to economic uncertainty. Who knows, they may even increase their charitable contributions to help those who are less fortunate than themselves.

However, lower prices means lower profits, and lower profits means lower returns on investments. As the dollar gets stronger, stock prices plunge as investors sell the stocks they hold for those they hope will have a higher return. Corporations end up losing investors at the same time that profits are lower. It is not hard to see how this situation could escalate to a potentially devastating outcome.

Another recent worry for Wall Street is the reported decline in unemployment. That recent announcement triggered a massive sell-off on Wall Street. Why? For the same reason that the strong dollar presents an issue for investors. If more people are being employed, then payroll expenses are higher. Higher payroll expenses cut into profit levels, which means lower returns on investments. The results are the same as for the strong dollar.

It is not hard to see how almost every example of what is good for the average person in terms of working to support a family is regarded as bad for Wall Street. Wall Street's reaction is not based on whether these things which are good for the average person are maintainable with reasonable profits. These corporations were not reporting that they had shifted into unprofitable situations, the level of profits had simply decreased, or had the potential to decrease, by the improved situation for the average worker. However, I haven't seen any report about this being an economically unsustainable situation. Doesn't strong buying power coexisting with sustainable profits indicate a healthy economy?