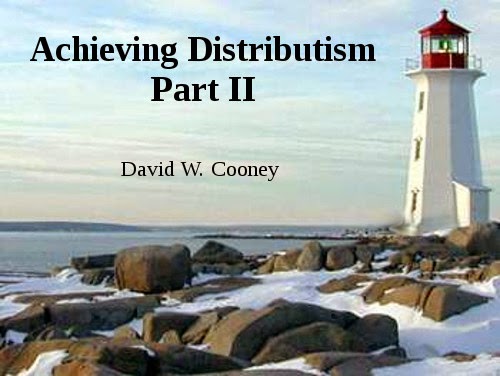 Asserting the right to own private property is not the same as asserting the right to acquire unlimited amounts of it, nor is it the same as saying there are no other limitations in regard to that acquisition. This is one point where capitalists will raise a huge objection. We must keep in mind that the basis of the right to private property is the right to secure for oneself, and one's family and heirs, the basic needs of life and the ability to achieve a good standard of living according to the social norms of the society at large. This is not merely a social right; it is a right based on our very existence as rational beings. Those who do not have this must be able to better their situation so that they do, and society must be structured so that anti-competitive forces cannot act to hinder them from being able to accomplish this for themselves.

Another aspect about asserting the right to own property is that it doesn't necessarily mean you have the right to obtain whatever it is that you want. Does the citizen of one country necessarily have the right to purchase the land of another country? Some would argue yes, but I believe a political state has the right to restrict ownership within its jurisdiction to its own citizens. Is this a denial of the right of ownership? No. It is actually protecting the rights of its own citizens to acquire ownership by preventing it from being swallowed up by foreign interests. I believe the same can be argued for more local political entities as well.

Prior to the revolution of economic liberalism which became capitalism, it was the norm for local communities to require local citizenship to own property and businesses within their jurisdiction. This was because citizens were empowered to protect their own common good in respect to the right of ownership through the political entity which best represented them and over which they had the greatest political influence. Economic liberalism dismantled this protection by using economic power to manipulate the higher levels of government to usurp the local authority. Customary rights that were considered legally binding, and which had been upheld in courts for many generations, were suddenly nullified because they had never been officially “codified.” The public were kicked out of the “commons” to which they previously had legally protected access. Economic power was then exerted on the government to systematically make illegal the means the common people used to support themselves, and to make legal things that were previously illegal.

The point here is that some who argue against the changes necessary to establish distributism cite the currently established laws as if the very idea of changing that law is unjust. However, they are ignoring that the current laws are themselves replacements of older laws and customs established in order to ensure justice. Those laws did this by establishing an enforceable social structure to help ensure that just about anyone who wants property could obtain it – a structure that allowed the common citizen to not only support his family, but to better his state in life without having to depend on some wealthier person to provide him a job at a wage. Capitalism, to the extent it can be claimed to have ever existed, only did so because its proponents were able to get the laws changed to favor what they wanted.

I am not advocating a scheme of nullifying existing ownership. What I am proposing is that, because local communities have a right to protect the common good of their citizens, they can establish laws requiring that, other than inheritance, future transfers of ownership, for fixed capital in their jurisdiction must be to someone who lives within the community. I can certainly see the possibility of exceptions for industries that are necessarily large, those for which it is impractical to expect more than a few establishments within a larger region, but for those businesses we can expect to find virtually everywhere, like restaurants and bakeries, I see no injustice in requiring local ownership because it does not prevent anyone from owning such a business within their own community. Saying that you are free to open a shop in your own town, but not in another, is not equivalent to denying you the right to own a shop. It is merely a reasonable and just limit to protect that right for everyone. It is a limit that used to be the norm.

Therefore, one of the first steps to achieving distributism is to go through a process of devolving of government authority according to the principles of subsidiarity. The individual citizen has the greatest influence over his local government and local businesses. Therefore, if much of the authority that has been usurped by county, state and federal government was returned to the local community, the citizens would enjoy greater political influence and therefore greater freedom. Likewise, if the local businesses were run by members of the community rather than by remote corporate officers, the community in general would have a greater ability to ensure that the business is run in a way that supports the needs and wants of the community. Local businesses could be more self-regulated through work-based community organizations like guilds.

Another change that would need to be achieved is to increase the local production of basic needs. Decentralizing the production of food, clothes, and other basic necessities would insulate and protect the local economy from outside disruptions. If local economies all across the country are made more stable in this way, then the overall economy will also be more stable. This would create a better environment for the wider establishment of truly local financial institutions to provide local loans and investments in local businesses to meet local needs. The ability to localize finance would help communities cease being dependent on the “health” of international banks and the fluctuations of the stock exchanges. I also believe that shifting to local financial institutions is an important step to eliminating usury.

What I have written so far has focused on the need to localize the economy, which is dependent on decentralizing political and economic power according to the principles of subsidiarity. However, distributism is able to adapt to modern realities. It strongly favors the local, but does not exclude the idea of the larger economic environment. In the next part of this article, I will discuss ideas like internet shopping, large scale productions that make more sense on a regional level, and other factors that distributists cannot ignore if we want people to seriously consider distributism as a viable economic environment.