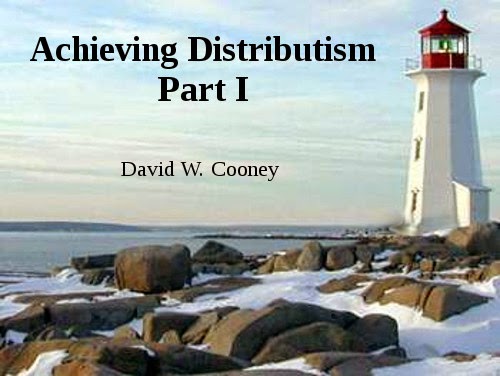 There is a persistent question which is hurled before us as a gauntlet. Just how do distributists propose that we achieve the wider distribution of productive property? We are accused of secretly advocating a powerful central state on the grounds it is necessary to forcibly redistribute the property to fit our scheme. We are accused of having no plan other than to rob the current owner of what is lawfully his in order to give it to others. This is a charge that must be taken seriously and clearly answered.

To begin with, it must be remembered that distributism is founded on a different philosophical view than that which is generally accepted by present day society. It is my view that this is our greatest obstacle. Society in general will simply not accept our ideas if they can't comprehend the basics that are the foundation for change, even if they agree that the current system is both corrupt and essentially flawed. It is this obstacle which will cause most of the negative reactions to the suggestions put forth in this article.

Contrary to the claims of some of our critics, distributists are not stuck in the past. Distributism is not a call to abandon the cities and technology to return to an agrarian society, nor it is a call to return to a romanticized version of the Medieval Era. Some of our critics accuse us of "secretly advocating" an all-powerful central government, but in reality we believe that government authority should be devolved to the local community in accordance with the principle of subsidiarity.

It is true that today's distributists still look to the past, because not all that was abandoned should have been. We also acknowledge that the world has changed since the distributist system was first formulated. Today's distributists also look at what is being done in the present, where we find that others have come up with viable alternate ways of doing business that should be given serious consideration.

There is not merely one solution to the current economic problems of our society. The Center for Economic and Social Justice has some very interesting ideas that work within existing structures to try and achieve wider ownership of existing big industries. This would certainly go a long way toward bettering the economic life of people in general. Although it seems to me that it still separates the ownership of productive capital from the work on it, their Capital Homesteading idea would at least address to some extent the issue of concentrated ownership. It is less disruptive to the current order than a completely distributist solution. In my view, it opens interesting possibilities for the wider distribution of wealth which could ultimately be a step toward achieving a truly distributist solution which I obviously prefer.

As you continue through this article, keep in mind that each social change is a part of a whole. It is unlikely that the whole would be achieved all at once, but the basis of each part is the whole. You should also keep in mind that there isn't one "distributist" solution. The basic principles are the same, but differences in culture and circumstances may result in some differences in the forms and structures of distributist societies as well the means of achieving them.

If we don't advocate taking capital from the current owners to achieve a wider distribution of ownership, exactly how do distributists expect to accomplish such a thing? One of the foundational documents of the distributist movement is Pope Leo XIII's, Rerum Novarum. In section 15, we are reminded that, just as the socialist idea of a community of goods must be totally rejected, the "first and most fundamental principle, therefore, if one would undertake to alleviate the condition of the masses, must be the inviolability of private property." He also points out, in section 13, that the right of inheritance is necessarily a part of the right to private ownership in productive property. The challenge for distributists, and anyone else who wishes to achieve greater economic and social justice, is how to ensure that the current concentrated ownership gets transferred to a more distributed ownership without violating the right to maintain ownership or inheritance. Part of addressing this issue is to remember that the whole point of asserting the right of ownership and inheritance is to ensure that the family can obtain a just income - that is, enough to provide for the current and future needs according to the requirements of human nature and one's state in life. This is more than a mere subsistence wage.

This point is reasserted by Pius XI in Quadragesimo Anno, where he reaffirms Leo XIII's assertion that "'through the entire scheme of laws and institutions ... both public and individual well-being may develop spontaneously out of the very structure and administration of the State.' Just freedom of action must, of course, be left both to individual citizens and to families, yet only on condition that the common good be preserved and wrong to any individual be abolished." Indeed, Pius  XI points out that "if this cannot always be done under existing circumstances, social justice demands that changes be introduced as soon as possible whereby such a wage will be assured to every adult workingman." This means that the role of the civil order is to ensure that laws not only allow for each family to achieve a just income, but they must prevent the establishment of methods and schemes that would prevent that achievement. This is not, as some critics claim, a call to an all-powerful state, but rather a call for the civil order - which properly operates according to the principle of subsidiarity - to ensure and encourage citizens to establish organizations and means necessary for accomplishing a just social order and all that it encompasses.

This understanding is the basis for the various societal changes typically advocated by distributists. Before going on to the next part of this article, wherein I discuss specific changes, keep in mind that mine is one voice among many. I do not pretend to present the definitive distributist position, nor to represent the positions of other distributists who are quite capable of speaking for themselves.