Who's Looking Out For You? 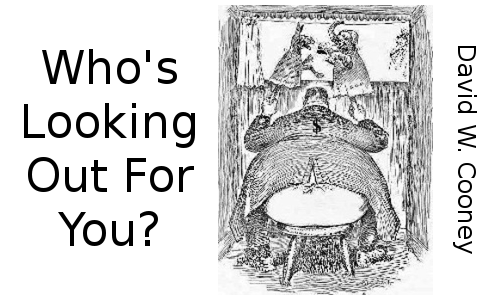 As we approach the 2016 election run in the United States of America, you can expect the usual claims from both of the major political parties about how they are really on your side. You probably know the narrative. Republican candidates will assure us that the Democrats are all about big government taking away what you've earned to give it to someone else. Democrat candidates will assure us that the Republicans are all about giving tax breaks to the rich and don't care what happens to you. Some people may ask which of these parties is really on your side. I prefer to ask if either one is.
Now, I am not one of those who claims that there is no difference between the two parties. There are some significant and important differences. However, this article is about where they actually are basically the same. The reality is that some companies have grown so large that they wield enough economic power to effectively control both parties. Despite the claims of "American Exceptionalism," the United States is essentially a plutocracy ruled by its own version of an aristocratic elite - just like most other developed countries in the world.

Republicans claim to be about smaller government. Smaller government would be less intrusive into state matters and individual lives. Well, they have had opportunities to at least slow the growth of government. They've held the presidency for 20 of the last 35 years. Even without having congressional control, the president's power of veto can wield tremendous pressure to change policies. Instead of decreasing, or even maintaining its size, the federal government has persistently grown during their last two reigns of power in this time. 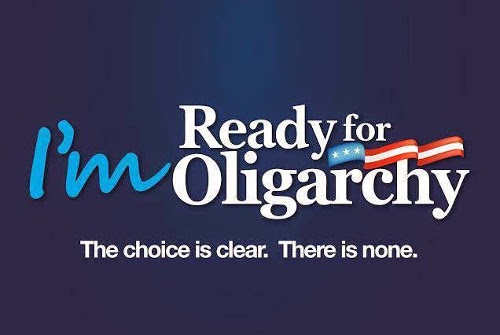 Democrats would like you to believe that they stand against big business interests, but their record simply doesn't show it. The tax breaks and loopholes they blame on the Republicans remained in place during their reigns. They try to blame Republicans for stalling reform legislation, but the Democrat party controlled both houses of Congress during the first two years of the Obama administration. Even when they controlled an essentially one party government, they failed to eliminate the tax breaks and loopholes they decry on the campaign trail.

This isn't just an issue in the federal government. In 2013, the Democrat-controlled government of the state of Washington "awarded the largest state tax subsidy in U.S. history." This was hailed by Business Facilities and is now being challenged as violating international trade agreements. The problem is that these giant corporations with large profits get benefits that not only don't exist for others, but smaller businesses are typically put in the position of paying through taxes for things to benefit the large corporations. While it may not be the case for a company like Boeing, when companies like Wal-Mart get these subsidies and tax breaks, the smaller companies end up paying to help their competition put them out of business.

There are essentially two reasons that explain why those in government would do this. The first is that they want to maintain the position of big business. I have stated before that, despite the claims of "conservative" pundits, most Democrat politicians, including their most prominent leaders, are not socialists. They are firmly rooted in the Keynesian idea, and that idea is an attempt to stabilize capitalism. It is completely dependent on the continued existence of wealthy businesses and people who can be taxed to support those whom capitalism ignores. The second reason is that politicians who would actually want to fight against this type of corporate favoritism find themselves facing an unwinnable situation.

Over the last 100 years, distributists have tried to point out how big business and big government go hand-in-hand. They don't merely co-exist; they are co-dependent. This is why they will eventually lead to what Belloc called the Servile State. This does not always mean that they treat each other with kid gloves. Theirs is just the kind of dysfunctional relationship you might expect from those who are hungry to win power over those on whom they depend. They both support and threaten one another. In the case of Boeing and Washington state, the threat was moving a large part of production on its newest plane out of the state. Boeing employs more than 80,000 people in Washington state. Even eliminating 5% of those jobs would be devastating to communities in the state. It goes well beyond the prospect of several thousand suddenly unemployed people. Boeing estimates that its business supports an additional 161,000 jobs in the state. These represent companies that do direct business with Boeing as well as companies that get an indirect benefit by having Boeing employees as customers. Many jobs could be lost from those local small businesses whose customers are primarily Boeing employees.

Conservative political commentators point to all of these jobs as evidence of the benefit of big business, but this just shows them as inconsistent with their professed principles since these big businesses rely on subsidies these commentators consistently denounce. When businesses get this large, it is not merely the employees who find themselves at the mercy of their pay masters, but entire large communities. Communities who, in their own desperation will take out on any political candidate or party they think is even partly to blame for their situation. If Washington hadn't come up with a better tax deal than the other dozen or so states that were offering deals to try and get Boeing's business, the political fallout would have been devastating. Distributists don't argue that we shouldn't have a company that requires large amounts of workers like airplane and automobile manuractureres. What we would like to see is that the workers, or at least a significant portion of them, become the owners of these companies. Then the company would have more than a financial investment in the community in which it operates. We don't see why it is necessary for there to be only a couple of such manufacturers in the country.

So, who's looking out for you? Don't go by the campaign rhetoric of the two major parties, but by what they actually do when in office. It turns out that neither of them are. As I sometimes like to say, "The problem with voting for the lesser of evils is that it is too frequently not lesser enough."
Posted by Practical Distributism