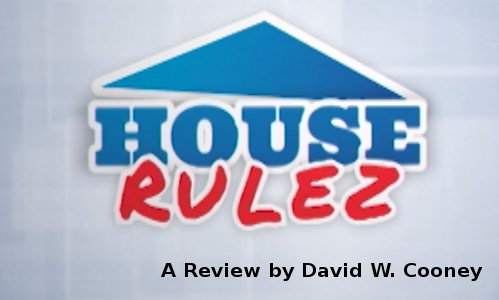 What limits are there to what people will do for money or some other form of success? This question is the basis of what is called, “reality television.” While some people point out that the situations of these shows are unreal, the “realities” that are being presented to us are the decisions of the people in these situations. What alliances will they make and break? What lies will they tell? What are they willing to do to each other? To what will they subject themselves in order to win? House Rulez takes these questions to a new level.

House Rulez was produced by Dead Gentlemen Productions and Zombie Orpheus Entertainment, and it offers two new twists on the normal reality show. The first twist is that the contestants cannot vote or otherwise force each other out of the contest. The second twist is that we get to see the production process. We are shown the behind the scenes discussions of the show's producers. At the same time we are seeing the decisions of the contestants of House Rulez, we are also seeing the decisions of its producers as they attempt to guide the outcome for the purpose of entertainment.

These twists bring the reality show concept to a new level. How far will the contestants go to get the others to choose to leave? It also gives us some insight to the trials of the show's producers who struggle to make sure that the show remains entertaining for a variety of audience demographics. We watch how the different personalities on both sides of the camera set the direction of the show.

The impact of House Rulez is one that sneaks up on the viewers. It is light humor wrapped around a powerful message concerning self worth and ethics. This impact is unavoidable when, at the show's conclusion, we watch as [spoiler deleted].

I admit that I am biased. Zombie Orpheus Entertainment is an organization that operates in a way I believe is compatible with distributism. Many of the shows from Dead Gentlemen Productions are not only entertaining, but include a good message which they deliver without losing the entertainment. Instead of the entertainment straining to break through the message, the entertainment carries the message in a way that does not bury either itself or the message. House Rulez is a good example of this skill in action.

Email ThisBlogThis!Share to TwitterShare to FacebookShare to Pinterest
Labels: Reviews