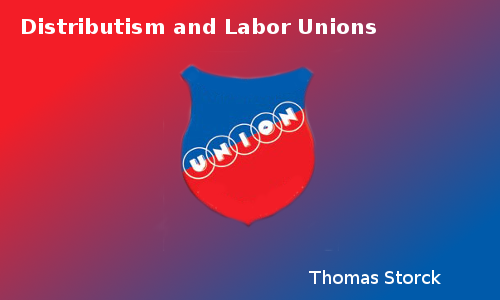 It has sometimes been said that distributism, the economic system that promotes widely distributed productive property - whether this is owned by a single proprietor, a family, or a worker cooperative - is hostile to labor unions and the labor movement. While I do not deny that there may have been someone who labels himself a distributist who at one time or another said something negative about the labor movement, the central distributist movement, exemplified by theorists such as Hilaire Belloc or G. K. Chesterton, and of late by organs such as Practical Distributism or The Distributist Review, has not embraced such a position. Any apparent hostility is based upon a misunderstanding of the differences between a capitalist economy and a distributist economy. For example, when Belloc wrote that a union "is a proletarian institution through and through and a proletariat and a proletarian spirit is exactly what we are aiming to destroy,"[1] he was simply noting that in a distributist society the labor market divide between owners and workers, which is the hallmark of capitalism, would not exist, or would hardly exist. Since distributists desire a proliferation of small economic units - workshops, stores, farms - it is obvious that in such entities there would be no labor movement because there would be no labor. Or to put it more precisely, the worker would be the owner, and the owner the worker. There would be no need for him to form a union to protect his interests against himself. Entities that of necessity required a large facility with a large workforce would, according to the distributist model, be employee owned and administered by the workers themselves. Again there would be no need for a union. Thus Belloc is not exhibiting any hostility toward workers but rather hopes that their status may be improved by making them owners.

Although distributists desire that the need for unions be eliminated by making workers owners, nevertheless distributists recognize the desirability of economic organization. In fact, one of the central though sometimes neglected points of distributism, one that Hilaire Belloc insisted upon, is the creation of guilds or occupational groups, organizations of those in the same industry or selling the same products. Such guilds would work to eliminate or moderate competition and replace it with the cooperative idea that all producers are working together to supply the public with a necessary quality product, and there is no reason for any producer to desire a larger market share than is required for the support of his business. If a proprietor is making enough by his work to support himself and his family, there is no need and no right for him to work to put his fellow producers out of business by grabbing more market share than he already has. In addition, such guilds would probably regulate apprenticeship and other training programs, so that if there were any workers who were not yet owners, their interests would be watched over by guilds in which they themselves were members and had a voice and vote in the decision making.

But just because labor unions would be unnecessary in a distributist economy, that does not mean they are unnecessary in our capitalist economy. I myself, and I think most distributists, recognize the need for unions and the labor movement today, and lament the fact of labor's weakened and decreased role in the economy. In fact, Belloc himself thought that some unions might gradually be converted into guilds by being given an official role ("official charter") in regulating their portion of the economy.

Some of our greater trade unions to-day, though not officially chartered, have in practice attained many of the powers which an official charter would give. They, in practice, regulate wages, consider the opportunities of employment, prevent their function from being swamped with numbers and in general substitute status and order for chaotic competition.

It would be possible to begin by regularising these few successful experiments, giving them a legal basis, and using them as models for extension into other fields.[2]


Distributists desire above all that the economy function according to its natural purpose, that of providing the human race with the external goods we need or reasonably want, whether consumers who need a steady supply of well-made goods, or workers who need the economic stability that provides security for families and allows all of us to focus our attention on more important matters than earning a living. The economic system is not an end in itself, it is logically subordinate to sociey as a whole, and to the real needs and ends of humanity, both in this world and the next. The proposals of distributists are designed to accomplish this aim, and carried out into practice, would attain it as far as our fallen nature would permit.

Email ThisBlogThis!Share to TwitterShare to FacebookShare to Pinterest
Labels: Business