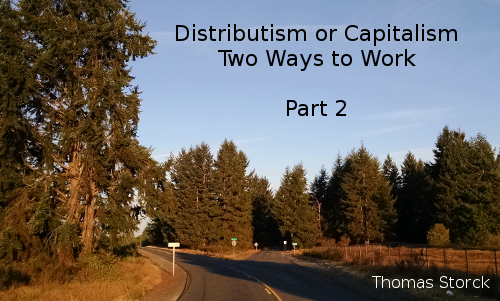 Next we come to what we term one's competitors, that is, those producing or selling the same sort of product. Under capitalism such producers are pretty much the enemy. Though there is a certain amount of collaboration on shared concerns - such as lobbying the government on matters of interest for the entire industry - generally it is held that since it is the natural aim of each business to increase its income without limit, the success of one firm always comes at the expense of the other firms. Each is competing for as much market share as possible. And such an attitude flows logically from a concern solely with profit and "the amount of wealth accumulated by the dealer." But if sellers and producers see themselves as supplying a need of the public, there is no reason why they cannot regard their fellow sellers and producers as partners in the same effort. Provided that sellers or producers make a profit sufficient to cover costs and provide for their livelihood, why should they wish that other sellers or producers of the same product suffer or go out of business?

The economic historian Richard Tawney speaks of this attitude toward producing in the following words:


The idea that there is some mysterious difference between making munitions of war and firing them, between building schools and teaching in them when built, between providing food and providing health, which makes it at once inevitable and laudable that the former should be carried on with a single eye to pecuniary gain, while the latter are conducted by professional men who expect to be paid for service but who neither watch for windfalls nor raise their fees merely because there are more sick to be cured, more children to be taught, or more enemies to be resisted, is an illusion only less astonishing than that the leaders of industry should welcome the insult as an honor and wear their humiliation as a kind of halo. The work of making boots or building a house is in itself no more degrading than that of curing the sick or teaching the ignorant. It is as necessary and therefore as honorable.... It should be at least equally free from the vulgar subordination of moral standards to financial interests.[2]


We take it for granted that producers are competitors, but if we stop and examine this, there is absolutely no reason that this should be the case. A physician, for example, will generally see other physicians as cooperators in treating disease, not as so many competitors to be put out of business. As Tawney said, there is no reason why those who make boots or build houses should do otherwise. So long as each proprietor or owner is able to make a sufficient living by his work, why would he hope to so dominate the market that other producers or owners would suffer?

While the differences in how distributism and capitalism treat these different groups are obvious, there is another difference which is less tangible but no less important. This is how each system affects the general culture and how each affects producers and sellers themselves.

Proponents of capitalism are not ashamed to call our society a "commercial society." The neo-conservative political scientist, Harry Clor, wrote in 1969 that

American society is said to be devoted to low, dull, and unexciting goals [and] this mediocrity is attributed to commercialism, a commercialism that produces an acquisitive, comfort-seeking, security-minded, and, hence, uninteresting way of life.

This description of American life is no doubt exaggerated and oversimplified. But it is difficult, as well as unwise, to avoid the acknowledgement that there are some elements of truth in this description. In the United States a remarkable amount of attention is given to the accumulation and consumption of commodities. And we do not seem to mind being called a "consumer society." It does appear to be the case that for most Americans the pursuit of happiness has come to mean, in large measure, the attainment of economic security and the continual multiplication of the means for personal comfort and enjoyment.[3]


What else is the American dream than the acquisition of more and more stuff? This is the spirit that is fueled by capitalism, for "in a Commercial society the amount of wealth accumulated by the dealer is the measure of success." But distributism would tend to foster a culture that understands the true purpose of work and wealth, which is not the endless and purposeless acquisition of goods, but possession of such property as supports the real ends of human life, life in our families and neighborhoods, the intellectual life, the worship of God. When our acquisition of material goods hinders any of the above, then we know something is seriously wrong with the way we organize economic activity.

Finally, what of the producer or seller himself, whose chief duty is not to make a profit but to save his own soul? Any economic system that praises and values acquiring wealth as an end in itself will turn the economy into an occasion of sin. St. Paul in his first letter to Timothy wrote:

If we have food and clothing, with these we shall be content. But those who desire to be rich fall in temptation, into a snare, into many senseless and hurtful desires that plunge men into ruin and destruction. For the love of money is the root of all evils; it is through this craving that some have wandered away from the faith and pierced their hearts with many pangs. (I Tim. 6:8-10)


It is no secret that our commercial society does not look upon the desire to get rich as a disordered passion. Rather it is widely held to be an entirely sensible and praiseworthy motive for one's conduct.
The ideal that a capitalist society values is not that of St. Paul, not of someone who fears riches as a possible occasion of damnation. It is the rich man, the self-made man, the entrepreneur who makes a fortune that most of those who live in capitalist societies admire. But medieval society, which understood economic activity as part of the hierarchy of human acts which ought to link us to heaven, regarded moneymaking as subject to strict limits. If someone had a sufficient income to support his family, then the only reason for seeking further wealth was in order to give it away.

We can, therefore, lay down as the first principle of mediaeval economics that there was a limit to money-making imposed by the purpose for which the money was made.  Each worker had to keep in front of himself the aim of his life and consider the acquiring of money as a means only to an end, which at one and the same time justified and limited him.  When, therefore, sufficiency had been obtained there could be no reason for continuing further efforts at getting rich,...except in order to help others....[4]


Though most Christians will assent to the idea that economic activity is merely a subordinate part of our lives, all too many will then turn around and deny that assent by defending an economic system in which economic activity bears no relation to reasonable human needs. Sometimes this occurs because people fear that the only alternative to disordered capitalism is a Soviet-style command economy. But this is not the case. Distributism not only assumes private property but sees in the institution of the guild or occupational group the proper place for economic regulation, with the state having a secondary role, chiefly as the final enforcer of guild regulations.

The things of this earth were meant to aid us in our journey toward heaven. But if we use them in a disordered manner they will hinder that journey and can even be the occasion of our damnation. Capitalism, since it regards economic motives and economic actions as ends in themselves, is a signal example of such a disordered use of earthly goods. But we can do better. We can adopt a system such as distributism which seeks, as much as our fallen nature will permit, to put our economic activity at the service of our ultimate end.