Socialism and the Early Distributists 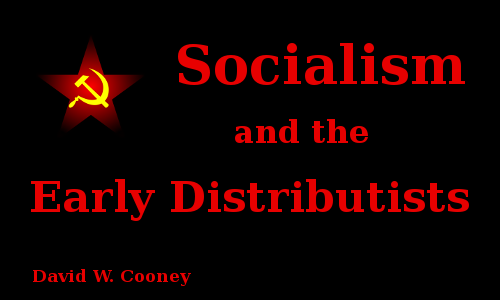 Distributists are often accused of being socialists, or at least quasi-socialists. This is a claim which we vehemently deny. However, it might be a surprise to know that some of the early distributists were involved in the early socialist movement. Does this fact not give credence to the claim that distributism is a form of socialism? Does this mean that distributists are being dishonest or inconsistent about the origins and aims of the distributist movement? These are serious questions which we must be prepared to answer. Although many people seem to be growing disillusioned by capitalism, the majority are not so deluded as to accept socialism. In order to address the issue, we must look at the beginnings of both the socialist and distributist movements.

The end of the 19th Century and beginning of the 20th was a time of economic destitution for the overwhelming mass of people in the most developed countries of the world - the bastions of industrial capitalism. The majority of those who worked for these industrial giants lived in extreme poverty and worked in unsafe and unhealthy conditions while the owners grew more wealthy and lived in increasing luxury. The plight of the masses led to exactly what one might expect from the situation - revolt against the capitalist system which was failing to provide them with even the basic necessities of life. The failure of capitalism to improve the living conditions of society overall, which its modern advocates still try to claim will be its natural result, caused the rise of the labor movement and the establishment of its powerful unions. It caused increased government regulation of businesses to implement safe working conditions, eliminate child labor and establish a minimum wage. It caused government welfare programs. It also caused the rise and popularity of the socialist movement. The socialist movement was the largest, fastest growing, and most powerful organization against capitalism.  It was (and is) common for capitalists to brand anyone who opposes their system as socialist, but the accusation is unjust.

When Leo XIII wrote Rerum Nevarum in 1891, he pointed out that even though the problems of capitalism were truly creating injustices in society that needed to be addressed, the solutions proposed by socialists were themselves manifestly unjust because they denied that man has a right to property by his very nature. (§ 6) The solution of the socialists essentially substituted all right to property (and potential self-sufficiency) with the promise of guaranteed sufficient wages for all. In G. K. Chesterton's view, the result of capitalism was discontented slaves and what the socialists proposed would just make the slaves content with their slavery. The Pope pointed out that the right to at least attempt self-sufficiency is not merely inherent to the individual, but is an essential aspect to the idea of family as a form of society which is not only older than the state, but which has rights and duties that are quite independent from it. (§ 12)

In 1931, Pope Pius XI wrote Quadragesimo Anno. He reiterated Leo XIII's point that the solution proposed by the socialists for the problem of economic liberalism (capitalism) was "a remedy far worse than the evil itself." (§ 10) Pius XI explained further that the right to own property is not only a right inherently based in human nature, but that this right is not abdicated, as some were proposing, by reason of abuse or non-use. (§ 47) There were those who affirmed the right of private ownership of capital, but claimed that all products and profits beyond that needed to maintain capital belonged to the laborer. Pius XI declared that this was a more deceptive and dangerous error than true socialism. (§ 55) Toward the end of the encyclical, the Pope addressed the fact that the original socialist movement had essentially split into two major camps; the communists and the Christian socialists.

Thus we have the fundamental incompatibility between distributism and any form of socialism to the extent that it remains socialism. As Pius XI asserted, "If Socialism, like all errors, contains some truth (which, moreover, the Supreme Pontiffs have never denied), it is based nevertheless on a theory of human society peculiar to itself and irreconcilable with true Christianity. Religious socialism, Christian socialism, are contradictory terms; no one can be at the same time a good Catholic and a true socialist." (§ 120) Those who had joined groups like the Fabian Society had to consider their true position. Some, like G. K. Chesterton's brother, Cecil, had to be convinced that socialism in any form did not hold the true solutions to economic and political problems.