The bogus, self-serving notion that poverty is simple 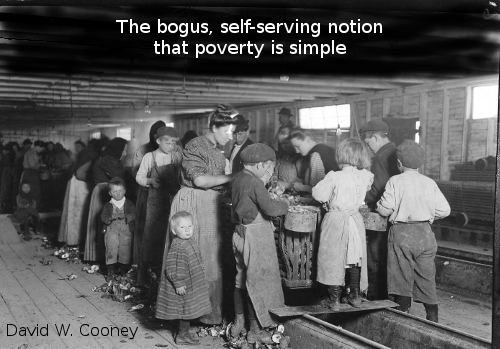 In a recent article for The Week, Jeff Spross makes a fair claim against the standard "conservative" rhetoric that the real solution to the problem of poverty is for those in poverty to start working. He also addresses the position of some conservatives who say that we can never truly address the issue of poverty because it is such a complicated human problem. Mr. Spross points out fatal flaws with this claim, but fails to see the fatal flaw in what he presents as the solution.

To start with the flaws of the "conservative" solution he criticizes, Mr. Spross rightly points out that, in the so-called "advanced" countries, it is not as simple as going out and getting a good job. Thanks to the continued outsourcing of unskilled labor to "third world" countries, our own poor are deprived of the ability to simply go out and get a job which will provide enough pay for the basic needs of every day life; especially if they are trying to support a family. Instead, we have become a society where one already has to have ready access to money in order to get a job that pays well. You can't just graduate from high school and get a low skill job that will provide food and shelter for a family. It is increasingly the case that you have to go to college, or at least to a trade school, to get a good job, and that means that you have to already have access to money to get the education needed to get a job that pays even a subsistence wage.

Therefore, the typical conservative position fails to account for that large portion of the population that does not have the necessary access to money. These are the people they tell to go out and get better jobs, but don't seem to realize the true difficulties that exist in doing so. Ironically, they simultaneously want to cut funding for the education they need to do so on the basis that such government handouts inculcate government dependence. This failure to see the incompatibility of the solution they propose and their cutting off the means to achieve that solution is the fatal flaw in the conservative position. They don't see how their own economic beliefs and policies created the poverty that made social welfare programs necessary.

However, this solution by the liberal side is just as bogus and self-serving as that of the conservatives. It starts by setting up the false premises that modern society, defined as one where "land and infrastructure is governed by private property rights, where we trade money rather than goods, and where labor is highly divided and specialized," somehow prevents people from being able to learn the skills and obtain the capital and resources they need to provide for their own living. Mr. Spross seems to jump straight from "primitive" agrarian societies to modern industrialized capitalism without considering any of the economic history between the two. We are taken straight from the ability to stake out unclaimed land to needing to go to college or trade school.

This bogus premise becomes the self-serving basis of the so-called "liberal" position that the solution to poverty in a "modern" society is increased intervention and spending by the highest level of government. Looking at the level of national spending on social programs in other Western countries as an example to follow, Mr. Spross criticizes the US because its federal programs are too small, to diffuse, and too ill targeted. However this is a very simplistic view of how to address the problem of poverty. The economic situation in these other Western countries is rapidly approaching a more wide spread application of the so-called austerity measures, cutting back the programs Mr. Spross advocates because they are unsustainable. I maintain that the reason they are unsustainable is because they were too centralized, which made them too large to effectively target those in need. Mr. Spross claims that it was increased social spending at the national level that maintained full employment in the mid-20th Century, but it was actually a much more complicated formula of social programs, subsidies to large corporations, federal regulation favoring those same corporations, and easier access to personal debt. In other words, the perception of economic prosperity was false because it was actually based on people and corporations being economically supported by government and banks rather than being economically productive in a sustainable way. If they had been truly economically productive, and if this productivity had developed along the lines of supporting the wide-spread and independent ownership of production, then the need for government programs of assistance to the poor would have decreased.

The reality is that private property rights do not create a need for government programs to get the skills needed to earn a descent living. The earliest historical records reveal societies that already had land and infrastructure based on private claims to property. Even the "primitive agrarian" Mr. Spross uses as his example staked out unclaimed land, thereby claiming private ownership. Unless you discuss nomadic tribes or those striking out to form new cities, societies were based on private property rights and used some form of money to exchange goods for thousands of years before the rise of capitalism as understood by modern society. A look at different societies at different periods of time reveal that there is a way of providing the means to learn the skills and acquire the capital needed to be self sufficient. The establishment of wide spread private ownership of property and the guild structure during the High Middle Ages were key elements in nearly eliminating slavery, which was subsequently brought back by capitalism. The apprenticeship program of the guilds provided the means of support while learning the basic skills needed to do productive work. Once you became a journeyman, you could seek out further work and instruction to achieve the highest level of skill - that of master. When you were achieved the master level, you continued the process by having your own apprentices. It was these elements that allowed the slave to become first a serf and then a peasant - that is an economically and politically empowered citizen who was able to provide for himself and his family.

No, the solution to the problem of poverty is not, as Mr. Spross suggests, "as easy as pie." I've talked to people who know how to bake, and pie isn't actually that easy either, especially making a good crust. I do not say that government spending, including at the federal level, is no part of the solution to the problem of the poor not having access to a good job. It seems that this may be necessary in our current economic environment. However, I do not agree that the solution is as simple as having the government borrow, print and spend money.

The problem of poverty is one that we will always need to address. "For the poor you have always with you: and whensoever you will, you may do them good." (Mark 14:7) If we truly want to minimize poverty by helping people get out of it, then we should look at what has actually worked. This may sound like a simple solution, but it isn't because it involves changing our perception of economics and government to include subsidiarity and solidarity. It involves unlearning the lie that economics is a science that can be separated from ethics in any practical way. It involves working out the complex issue of how to achieve the wider establishment of private ownership without committing acts of injustice. These are not simple things. However, it is not so complicated that we should give up trying, or simply try the same failed solutions over and over again as though they will somehow produce different results than they did in the past.