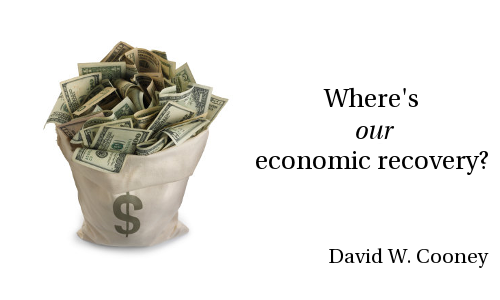 We've been told that the economic recession of 2008 ended around June of 2009. For the last six years, the US economy has supposedly been recovering. Banking leaders are claiming that the economy is now doing well. If this is true, why is it that so many Americans haven't seen it? Banking leaders and other experts seem to only be looking at Wall Street even though it only provides half of the jobs in the US. The economic market that provides the other half of the jobs, "Main Street," is still asking when they will see any real benefits of this six year recovery.

Now, not all economists appear to have a blind spot regarding Main Street. There are several who have pointed out that the recovery has only benefited Wall Street. I don't know if they have noticed the difference between what Wall Street and Main Street consider to be good economic news, but they at least notice that not everyone has recovered.

It is getting more and more difficult to believe anything reported on the economy. You can easily find contradictory reports on the same economic factors in any given week - even from the same news sources. If you look at what's reported over a month, or over the last year, the confusion becomes even more pronounced. It was just a few months ago that some economists were claiming that Main Street was going great.

Is it any wonder that so many people seem to be looking beyond the standard outlets for answers to their economic questions? We all watched while our government approved of the Federal Reserve pouring trillions of dollars to the banks. This would, we were promised, boost the economy and help everyone. The result has been record profits for those banks and large, publicly traded companies. What did it do to help the average citizen?

It may be true that hiring and wages have generally improved for small private companies, but most reports confirm that this has been insignificant. All indicators seem to show that very little of those trillions of dollars helped that half of workers in the small business job market. However, has anyone asked just how much those dollars helped the average employee of the big publicly traded companies? We know that the CEOs and investors have benefited, but how much did the economic stimulus packages and Quantitative Easing help the workers in those companies?

It seems that an increasing number of average people have started looking at other economic indicators beyond those reported in the mainstream news. The economic news says things are doing much better, but the people don't believe it. They are looking at the shops and small businesses near their homes and work. Not all is bad news, but they can clearly see that the news isn't all that great. They certainly can't see enough of a change to account for several trillion dollars injected into the economy over the course of five years. For many of them, they seem to believe that many of the same banks who were complicit in causing the economic collapse of 2008 took the money intended to fix the economy and kept it for themselves.

Many average citizens are fed up with big banks, big businesses and big government. Believing that those who have been running the economy, those who ruined the economy, lack either the knowledge or interest to fix it, more and more average people are going local. There has been a resurgence of interest in local independent business. While the economic "experts" in charge of national economic policy ignore Main Street, the average citizens are waking up to the "real economy," the economy that has a direct impact on their families and the families of their neighbors. If this trend increases, we may actually see a recovery of the "real economy," but it will be accompanied by the gnashing of teeth from Wall Street.