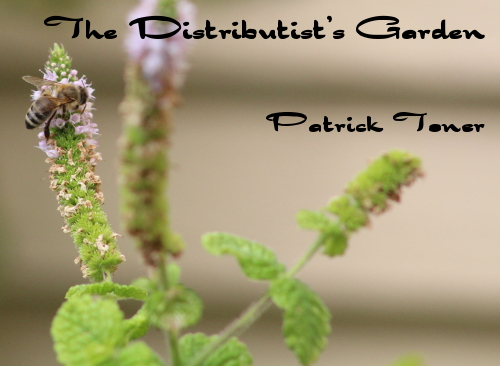 The Distributist should garden as though it matters.  Because it does.  In an earlier piece I urged Distributists to grow crops that provide the greatest amount of nourishment.  In this piece, I will urge Distributists to recognize the temporal element in gardening in addition to the spatial element.

If this sounds unlikely, allow me to direct you to Elliot Coleman, gardening guru from Maine, who grows food all winter long without expensive greenhouses.  The book’s cover photo is extremely unfortunate, since he’s shown standing inside a massive greenhouse.  Well, yes, he has greenhouses, too.  He’s a full-time vegetable farmer and his needs are different from yours.  You don’t need a greenhouse.  You don’t need much at all—perhaps some plastic conduit tubing bent over a garden bed and covered with plastic sheeting.  An unheated mini-greenhouse, or hoop house as they’re typically called.  If you put a layer of garden fabric over the crops inside the hoop house, you’ve got two layers of protection from the cold.  Your plants will still freeze on very cold nights, but for many vegetables that will do them no harm.

I live in North Carolina, not Maine.  I can’t speak to the growing seasons in the extreme north, but let me give you a hint of what you can do down here in God’s country.  In the early spring (generally by late February, but certainly by mid-March, depending on whether it’s a really tough winter), I can plant cold-hardy crops.  Say I get some carrots in the ground by March 10.  They will grow slowly in the spring, but they’ll generally be ready to pick by the beginning of June.  So I can harvest carrots and then plant the bed to bush beans, which take roughly 60 days to harvest.  That frees up the bed again by early- to mid-August.  At that point, I can get some spinach planted.  I might want to use some shade cloth to keep the worst of the afternoon sun off the plants—spinach doesn’t like the heat down here.  But by nursing the crop along for four to six weeks, I can come into fall with a lovely flush of spinach.  I can pick and eat the crop over the fall, or I can just leave it in place and cover it with a hoop house once winter really sets in—and we can eat fresh spinach right up through spring.  For those keeping count, that’s three crops in one bed.

The crops I mentioned there are all fairly short-season, though.  So, you say, what about a long season crop like a sweet potato?  Won’t that take up the bed for the whole year?  Hardly.  Let’s follow the same bed through a second year.

Say I keep the spinach in place for winter harvest, and we finish eating the greens by February or thereabouts.  In March, I can plant a crop of radishes.  Those are very quick (though, again, in the early spring they’re much slower than they’d be in warmer temperatures and longer days).  The radishes can be out of the bed by May, and now that the ground is warm enough, I can plant sweet potatoes, which can take upwards of 120 days to mature.  So say I pull the sweet potatoes in late September or early October.  That leave the bed free for planting garlic towards the end of October.  Garlic doesn’t need any help getting through the winter except perhaps a little mulch.  It’ll be pulled the following June.

I could follow the garlic with, say, zucchini or beets, which can grow to maturity within 60 days.  Giving a window for harvest gets the plants cleared out by late August-early September, at which time I could plant kale, which, like spinach, can easily overwinter.  And on it goes.

If you read my earlier piece, and want to know how the crops I recommended there (potatoes, corn, dry beans and winter squash) would fit into this, they might go this way: early March, plant potatoes.  Harvest them by the end of June.  Plant drying beans.  Harvest them by the end of September.  Late fall, throw in some radishes, or transplant some spinach, or plant your garlic or some onions to overwinter, or any of a dozen other things.  In another space, start your spring with a quick crop of greens or peas or something, and then follow them in late May or early June with corn.  This will be ready to harvest (dry) by the start of September.  Winter squash has about the same growing requirements as sweet potatoes, so you could just switch it into that rotation as described above.

Again, if you’re way up north, you might get only two crops per year per garden space, rather than three.  But there’s basically no reason to get just one.  (I mean, apart from being too tired or busy—but I mean, there’s no gardening-related reason.  By the way, if you’re too tired or busy, there’s certainly a chance you can find someone else who would like to plant food on your property.  By the way, I don’t have an account with that linked site, and don’t know if it’s trustworthy or otherwise any good at all: it’s just meant as an example of what I mean.)

An awful lot of the people who grow gardens down here in North Carolina talk about “getting the garden in.”  This is a late spring ritual, when people get their beans and tomatoes and peppers and okra planted.  It’s a one-time-each-year thing.  Getting the garden in.  A ritual.  I love that people still do it: I’m always pleased when a younger person plants a garden, any garden.  (Though I’m not always pleased when they pour all kinds of synthetic chemicals on it.  But never mind.)  But there are better ways to garden.  If each bed that grows one crop could grow two or three crops, well, that would make an awful lot more food.  If we want to put our land to its best use, then we need to garden better.
Posted by Practical Distributism