Being Practical About Distributism 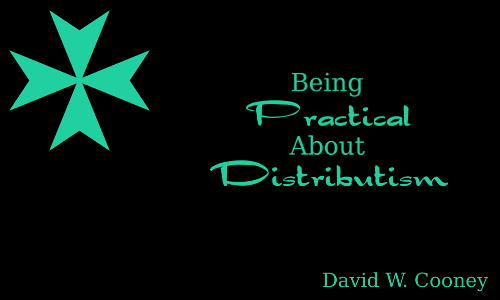 "The prudent man determines and directs his conduct in accordance with this judgment. With the help of this virtue we apply moral principles to particular cases without error and overcome doubts about the good to achieve and the evil to avoid."

Catechism of the Catholic Church, § 1806

Those of us who promote distributism would love if society as a whole suddenly accepted it and immediately started changing to become a distributist society. We also aren't holding our breath, waiting for this to happen. We live in societies structured on Lockean philosophy and which most mistakenly believe have a modified version of "Smithean" economics. So how should those of use who promote and desire a distributist society act in the midst of this?

It is easy for distributists to target large companies that don’t treat employees well. We’ve all seen articles like 10 Companies That Treat Their Employees Even Worse Than Amazon and The Worst Companies To Work For In The U.S. These are stark reminders of what distributists have known for a long time about capitalism; acting ethically in business is generally considered to be “good business sense,” but capitalism’s prevailing view that that economics is a speculative science, rather than a practical science, means that ethics is something completely separate from business. Therefore, there is nothing inherent in its view of economics that would require capitalists to apply ethics to business.

Some economic analysts even criticize successful companies that do. You might remember the article back in 2005 when Costco was called the “anti-Wal-Mart" by the New York Times. The article included criticisms by Wall Street analysts that Costco was treating its employees too well. Now, Costco is not run as a distributist style cooperative, but shouldn’t distributists be willing to give Costco credit for treating employees and customers well because it is the right thing to do? Costco has even shown interest in working with cooperatives. In Washington state, Taco Time tries to support local businesses by committing to getting at least some ingredients from producers within the state. I don’t know if this means that a Taco Time located in Tacoma gets its ingredients from producers near Tacoma, but at least their not getting it from other states or countries.

Spreading the word of distributism means more than criticizing what doesn’t fit our view. I have said that distributists should give preference to those shops that are most like the distributist model, like cooperatives and small independently owned shops and producers. I still say that, but we know very well that there will be times when we will need to go somewhere else. In those cases, we should go to those larger businesses that support other local businesses and which treat their employees well. We should also let them know that these are the reasons why we chose them instead of another place. If these companies keep hearing that customers like when they treat employees well, support local businesses and pass savings to the customers, they might explore even more was to run their businesses in just and ethical ways.