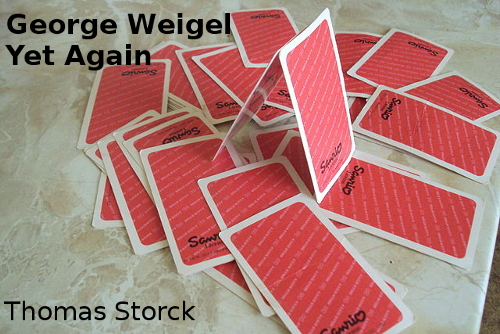 In a recent column the publicist George Weigel has weighed in on some of the dubious shenanigans surrounding the apostolic exhortation Amoris Laetitia, the document that, to say nothing further, by its lack of clarity has confused so many about Catholic moral doctrine on marriage and the reception of the sacraments. Weigel notes the recent statement by Pietro Cardinal Parolin, the Holy See's Secretary of State, that Amoris Laetitia constitutes a "paradigm shift" for Catholic thinking on marriage and the family.

The popular phrase "paradigm shift," as Weigel explains, comes from the philosopher of science, Thomas Kuhn's 1962 book, The Structure of Scientific Revolutions. Kuhn was describing the sometimes dramatic breaks that occur in the natural sciences, for example, the turn from the Ptolemaic to the Copernican view of the solar system. The term "paradigm shift" has been widely used in all sorts of contexts, even though Kuhn himself lamented its extension to areas outside of science.

So in describing Amoris Laetitia as a "paradigm shift," Cardinal Parolin was presumably claiming that the exhortation changes, in a sudden and radical way, Catholic doctrine on marriage, remarriage, adultery, reception of the Holy Eucharist, and so on. And Weigel quite rightly criticizes this stance. He writes, "For the Catholic Church doesn't do `paradigm shifts' in that sense of the term," i.e., "in the sense of a radical break with previous Catholic understandings." Weigel notes and deplores the incompatible interpretations and implementations which are being given to that document by various bishops and bishops' conferences around the world. "Because of that, the Catholic Church is beginning to resemble the Anglican Communion...."

On this matter I could not agree more with Weigel. But I am afraid that there is one big and glaring point which Weigel must come to terms with if he himself is not to be accused of inconsistency. This is the fact that since 1991 he has over and over again promoted St. John Paul II's encyclical, Centesimus Annus, as exactly akin to a paradigm shift in Catholic social teaching. In 1992 Weigel edited a book, A New Worldly Order: John Paul II and Human Freedom (Washington : Ethics and Public Policy Center), in which he described Centesimus as "a decisive break with the curious materialism that has characterized aspects of modern Catholic social teaching since Leo XIII" and as a "new departure in Catholic social thought." Many of the other contributors voiced similar opinions, Fr. Robert Sirico, for example, claiming that "Centesimus Annus represents the beginnings of a shift away from the static zero-sum economic world view that led the Church to be suspicious of capitalism." (More discussion of this with examples can be found here and here.)

In fact, just as some liberal Catholics have claimed the Second Vatican Council as a sort of "super-council" that could somehow negate all past Catholic teaching, conservative Catholics have frequently represented Centesimus Annus as a "super-social encyclical" that could somehow overturn all previous papal social teaching. But if the "Catholic Church doesn't do `paradigm shifts'", then this is clearly not possible in either case. If it were, if new papal or conciliar teaching could annul what had been taught authoritatively in the past, then no single point of Catholic doctrine could be trusted any more.

I call upon George Weigel, then, to honestly face up to this: If a paradigm shift is impossible in Catholic teaching, are you ready to repudiate your previous championing of the idea that Centesimus represents precisely such a shift? Or, if it does, how can you reject so confidently the idea that Amoris Laetitia is about to accomplish with regard to marriage what you claim was successfully accomplished in the area of social doctrine back in 1991? I am afraid, Mr. Weigel, that you can't have it both ways.
Posted by Practical Distributism