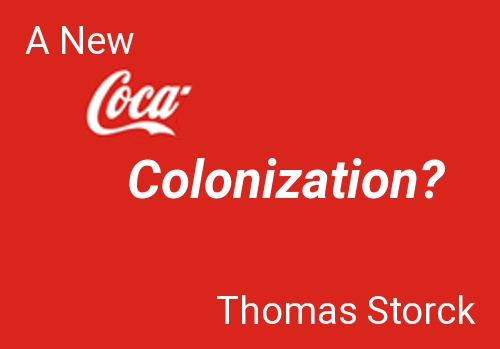 LETTER TO MY EUROPEAN CORELIGIONISTS

Although Anglo-Saxon North America began as simply an extension of Europe, settled entirely by Europeans - aside from African slaves - over time it has developed a peculiar culture of its own, with roots in Europe, certainly, but often developing and exaggerating European ideas in peculiar directions. Since the end of the Second World War the prestige of this culture has been vast, due to the role of Americans in the defeat of the Axis powers in western Europe and, later, after the development of the Cold War, because of the common perception that the United States was the only effective alternative to the Soviet empire. Hence the term coined after the War, the coca-colonization of Europe, based on the ubiquity of the American soft drink, Coca-Cola. Even with the fall of the Soviet bloc, American mass culture and technology have continued to exercise a widespread influence all over the world. As an American myself, I recognize that this widespread influence is by no means altogether good, and that it requires careful evaluation with regard to each cultural or political sector in which it has influence.

This influence is well recognized in the general culture, where American clothes, films, music - even words and expressions - are encountered all over the world. Yet the growing influence of the United States within the Catholic Church is perhaps not so well recognized or understood - but it is equally or more dangerous.

Until the middle of the 19th Century the Church in the United States was small and existed mostly on the margins of society. But with the beginnings of mass immigration in the 1840s, first from Ireland and Germany, then from Italy, Poland, many other eastern European nations, as well as from French Canada, the number of Catholics rose from about 650,000 in 1840, to almost 18 million by 1920 (shortly after which European immigration was severely restricted by law, especially immigration from southern and eastern Europe). Even before this gigantic increase in numbers the Church managed to attract hostilities from the Protestant majority, such as the burning of a convent and school in Massachusetts in 1834 and widespread anti-Catholics riots 10 years later in Philadelphia in which two churches were destroyed and 13 people killed.

The Church in the United States existed within a hostile culture and until the 1920s was preoccupied with seeking to provide the minimum of the administration of the sacraments and a Catholic education to a steady stream of immigrants. It was therefore to some extent understandable that Catholics did not recognize what should have been a very important part of their apostolate, something that in the long run would affect the health of the Church in North America as much as the continuing provision of the sacraments. What was this? It was a critique of Protestant American culture, the culture in which Catholics had to live, and whose ways of thinking and acting they were all too apt to adopt. With the exception of some German Catholic immigrants, there was little attempt to point out the dangers to Catholic faith and life inherent in the materialism and hyper-nationalism of American culture, or to seek means by which Catholics could preserve their own culture in the midst of an alien society.

As early as the 1890s Pope Leo XIII noted and condemned the heresy of Americanism, and the tendency on the part of prelates such as Archbishop John Ireland of St. Paul, Minnesota, to regard American Protestant civilization as somehow a gift for the Church universal, the most fertile soil for Catholic life to be found anywhere in history, is clear evidence that Americanism was no "phantom heresy," as some claimed. This propensity to uncritical encomia of their country and its culture by American Catholics, although well established by the time of the war of 1914-18, was to some degree held in check by two factors. The first was the fact that most American Catholics were working-class, often involved in the nascent labor movement, and by no means given to an uncritical approbation of the often ruthless capitalism of their country. Thus in this one important respect they maintained a critical reserve toward American society. The other factor was the general high level of obedience and discipline that existed in the Church universal in that era, so that at least verbal respect was paid to the Church's teaching on the social order, and the aspects of Protestant culture most obnoxious to Catholic thought and life held at arm's length.

These two factors disappeared, however, after the Second World War. In the 1950s many Catholics became richer and rose in the economic hierarchy, often leaving their ethnic neighborhoods and imbibing at the same time the outlook of bourgeois Protestant culture. Then, after the Second Vatican Council, discipline in the Church rapidly fell apart, and Catholics were no longer restrained either by fear of ecclesiastical sanctions or by their own consciences from rejecting those Catholic teachings they found uncongenial. The result in the United States is that active Catholics are now largely divided into two groups, groups that are adjunct to the two cultural-political blocs into which American society is divided. These are, of course, the liberals and the conservatives, keeping in mind the idiosyncratic way these terms are used in the United States. So on the one side one finds Catholics who point out rightly the perennial suspicion on the part of the Church toward neoliberal economics, and who lean toward the Democratic party, but who either make light of or even accept that party's championship of tenets directly opposed to Catholic morals, such as abortion or same-sex unions. Then, on the other hand, one finds Catholics who tend toward the Republican party because of its declared opposition to the aforementioned evils, and who either ignore or even embrace that same party's championship of laissez-faire economics, militarism, lack of concern for the environment, and disdain for their Catholic brethren from Latin America. This group, because of its adherence to Catholic teaching on sexual morality, trumpets itself as faithful, orthodox, the very paragon of Catholicism. In reality, both groups have surrendered to the American ethos, and represent different varieties of Americanism, but for our purposes here it is the latter group that is of most danger to the Church at this time, not because its distortions of Catholic faith and morals are necessarily worse, but because it is more apt to deceive those looking for an authentic expression of Catholic thought and life in our days.

The United States has the fourth largest Catholic population in the world. More importantly, its wealth far surpasses the top three Catholic countries, Brazil, Mexico and the Philippines. And the United States has many Catholics millionaires and billionaires, most of whom, not surprisingly, strongly support the policies of the Republican party. In this country the efforts funded by their wealth have changed the face of American Catholicism since the 1960s. To be orthodox, to be a real, faithful Catholic, is increasingly seen as being a neoliberal in economics, a skeptic as regards climate change, an upholder of "American exceptionalism," a supporter of a bellicose foreign policy. They have created or taken over an immense network of periodicals, organizations, schools and other institutions, dedicated to developing and promoting their model of how to be a Catholic, a model which at its best reduces Catholicism to a narrow set of moral concerns, such as abortion and same-sex unions, concerns that are obviously very important, but that ignores other vital aspects of Catholic moral teaching, and which at its worst, directly contravenes the explicit teaching of the Church on matters such as economic morality or war.

What does all this have to do with a new coca-colonization? Why does it affect Catholics outside North America? The rich Catholics who have done so much to deform Catholic thinking in the United States have, one must admit, a global vision. They understand the importance of spreading their ideas throughout the world. And Europe is one of the key places they would like to influence. Some organizations, such as the Acton Institute or the Tertio Millennio Seminars, promote a distorted version of Catholic social teaching, usually based solely on selected passages from John Paul II's 1991 encyclical, Centesimus Annus. Other groups, whose work is perhaps unobjectionable considered in itself, can be faulted in that they consciously or unconsciously reduce Catholicism to personal piety and morality, which while obviously essential, cannot be seen as the entirety of Catholic spirituality and moral life. How far we are here from the comprehensive vision of Pope Pius XI in his 1931 encyclical Quadragesimo Anno, who desired nothing less than a transformation of the entire social order in conformity with the teaching of the Gospel, and who did not erect artificial walls between Catholic moral teachings that concern the individual or the family, and the economic or social spheres.

As the continent on which Catholicism as a civilization largely developed, Europe must always have a special place in the life of the Church, and indeed in the heart of every informed Catholic. If Catholicism in Europe is reshaped according to the model of what North American Catholicism has become, it will be a tragedy for the Catholic mind. It will be a tragedy for Europe, obviously, and for the United States and the rest of the Catholic world as well, for we need Europe to offer a model of the Faith that has not been distorted according to Anglo-Saxon Protestantism. It is important that the deformations and eccentricities of American Catholicism not subvert Europe. Coca-colonization is as bad in the realm of Catholic thought as in the realm of mass culture or anywhere else. Although it is already far advanced in its activities, it is surely not too late to recognize and expose it for what it is. Otherwise we will have the sad result that Europe's erring daughter has returned and brought her vices back to her original cultural home.
Posted by Practical Distributism