Continuing a Legacy of Dissent 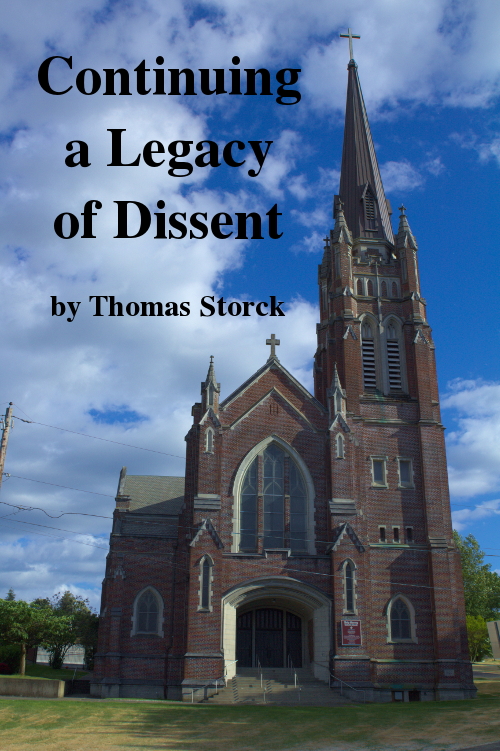 One of the Acton Institute's publicists, one Kishore Jayabalan, has given us distributists a kind of left-handed compliment recently - that is, he mentioned us, he recognized that distributists do exist! With regards to what he said about us, his article was simply misinformation, but that, unfortunately, is par for the course with Acton. But what exactly did he say? Mr. Jayabalan was engaged in continuing Acton's long-time project of misrepresenting John Paul II's 1991 encyclical, Centesimus Annus. He wrote,

Another distinctive aspect of JP II's social teaching is his insistence that the "Church has no models to present" (CA, n. 43); there is no Catholic "third way" between capitalism and socialism. This is a hard teaching for distributists and others who think there once existed a special form of Catholic economy or polity (aka Christendom) that the Church should still officially support.

There is a lot to unpack here, because there is a lot of misinformation in that short paragraph. Maybe I should begin by admitting that yes, indeed, I am one of those who thinks that "there once existed a special form of Catholic economy or polity (aka Christendom)". Indeed, I thought that it was pretty much acknowledged that there really was such a thing as the Middle Ages, and that it did have both a polity and an economy unlike those of today. As far as whether "the Church should still officially support" that economy, it is not difficult to find explicit papal statements regretting the passing of that "special form of Catholic economy or polity." Here is one from Pius XI's great encyclical Quadragesimo Anno.

At one period there existed a social order which, though by no means perfect in every respect, corresponded nevertheless in a certain measure to right reason according to the needs and conditions of the times. That this order has long since perished is not due to the fact that it was incapable of development and adaptation to changing needs and circumstances, but rather to the wrong-doing of men. Men were hardened in excessive self-love and refused to extend that order, as was their duty, to the increasing numbers of the people; or else, deceived by the attractions of false liberty and other errors, they grew impatient of every restraint and endeavored to throw off all authority. (no. 97)

As regards the first claim, what does the actual text of Centesimus Annus say in no. 43?

The Church has no models to present; models that are real and truly effective can only arise within the framework of different historical situations, through the efforts of all those who responsibly confront concrete problems in all their social, economic, political and cultural aspects, as these interact with one another.


It can be seen that John Paul is not denying the possibility of new economic models, rather he is contrasting models that are handed down by the Church ready-made, and those that arise out of actual concrete situations. This is indeed the way that the "special form of Catholic economy or polity (aka Christendom)" arose. Neither the rural feudal system nor the urban craft guilds came about because Alcuin or St. Anselm or St. Thomas Aquinas or anyone else assembled a committee of theologians and drafted a plan for the regulation of economic life. No, they, along with the other aspects of that "social order which ... corresponded ... in a certain measure to right reason according to the needs and conditions of the times" came about in response to the needs and possibilities of time and place, in accordance with the profound human and Christian sensibilities of medieval man. Indeed, it was the capitalist model of the 18th century that arose in a top-down manner, in response to the writings of Enlightenment intellectuals, and was gradually imposed by state power, regardless of the needs of the time, and regardless of the immense damage which it did to the fabric of European society.

Thus the first claim of Mr. Jayabalan turns out to be false. Let us look though at the corollary he tries to extract from his first claim, namely, that "there is no Catholic `third way' between capitalism and socialism." One important preliminary point here is that Mr. Jayabalan does not say what he means by capitalism. So if important reforms were instituted in the American economy, would that, could that, be something like a "Catholic `third way'"? Would Mr. Jayabalan deny that it would be possible to adopt, say, the German social market model, a model which would bring about a significant alteration in the way our economy operates. Could one call this a "third way"? Or would he deny that it is possible for a polity to promote, via legislation, worker-owned firms, or to favor small businesses at the expense of larger ones? If these latter two proposals were put into effect, we would be well on our way toward a distributist economy. And surely, if confronted with the abundant evidence in papal social teaching, Mr. Jayabalan would be forced to admit that the popes in their social teaching, from Leo XIII to Francis, have called for many of those very reforms. "The law, therefore, should favor ownership, and its policy should be to induce as many people as possible to become owners," wrote Leo XIII in Rerum Novarum, (no. 46), while Pius XI, again in Quadragesimo Anno, stated that "In the present state of human society, however, We deem it advisable that the wage contract should ... be modified somewhat by a contract of partnership" (no. 65). Perhaps Mr. Jayabalan would deny that were these and all the other mandates and suggestions contained in the body of papal social teaching actually implemented that this would constitute a "Catholic 'third way' between capitalism and socialism." So be it. If something like a distributist economy were established, I would not object too much if Mr. Jayabalan insisted that it was still capitalist. Names are not usually worth fighting about, and the important thing is that in the corpus of the Church's social doctrine there is sketched an approach to economic policy that varies significantly from our present capitalist system, especially as that exists in the United States. If Mr. Jayabalan wants to deny that, he will find that in the text of Centesimus itself this is clear. John Paul wrote, with regard to the collapse of Communism, "The Western countries...run the risk of seeing this collapse as a one-sided victory of their own economic system, and thereby failing to make necessary corrections in that system" (no. 56).

The Acton Institute and its numerous well-funded allies have for years promoted the untruth that John Paul II's encyclical Centesimus Annus oriented Catholic social doctrine away from its historic distrust of free-market economics. I have dealt with that claim more than once. (See here and here and here.) Benedict XVI went out of his way to clear up this point in his own social encyclical, Caritas in Veritate, saying that,

It is not a case of two typologies of social doctrine, one pre-conciliar and one post-conciliar, differing from one another: on the contrary, there is a single teaching, consistent and at the same time ever new. It is one thing to draw attention to the particular characteristics of one Encyclical or another, of the teaching of one Pope or another, but quite another to lose sight of the coherence of the overall doctrinal corpus. (no. 12)


But those Catholics who want to subvert the Church's teaching on the socio-economic order continue with their work of dissent. They take advantage of the ignorance of most Catholics as to what the popes have actually written since Rerum Novarum was issued in 1891. The most appropriate response to make is simply to quote what Pius XI wrote in his first encyclical, Ubi Arcano (1922), concerning those who do not conform their thinking and writing to the Church's social teachings: "In all this we recognize a kind of moral, judicial, and social Modernism, and We condemn it as strongly as We do dogmatic Modernism" (no. 61).