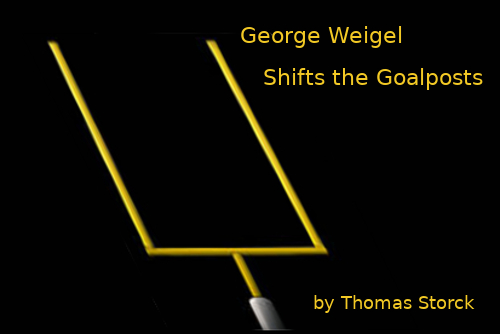 It can be tedious to untangle a web of misrepresentations, and I'm afraid that what I am about to write here may be tedious to some. But if we are to uncover the continuing misrepresentations made by George Weigel on Catholic social teaching, this will be necessary even if it is somewhat tiresome. Catholic social teaching, however, is important enough that a little tediousness is well worth enduring to reach the truth.

In 1991 Pope John Paul II issued an encyclical Centesimus Annus, commemorating the one hundredth anniversary of Pope Leo XIII's encyclical Rerum Novarum. Now as doubtless many readers know, Centesimus Annus created quite a bit of controversy as the claim was widely made that this encyclical was a "new departure in Catholic social thought," in fact, "the beginnings of a shift away from the static zero-sum economic world view that led the Church to be suspicious of capitalism."[1] It is not necessary to discuss here how true or even how plausible these claims are. I have dealt with this in detail elsewhere. But the point is that Weigel and his friends advanced and have continued to advance such claims about Centesimus.

What is happening now, though, that I accuse Weigel of moving the goalposts? In a recent article in First Things Weigel starts off with a most curious remark, curious at least to anyone who has followed the controversy since 1991. He writes,


For almost three decades the Catholic left has turned intellectual somersaults arguing that John Paul II didn't write, and indeed couldn't have written, what the rest of the world recognizes as a guarded endorsement of regulated markets in the 1991 encyclical, Centesimus Annus.

A "guarded endorsement" of "regulated markets"! Is that what the controversy has been about? That surely wasn't what Weigel and his co-authors seemed to think back in 1992. For Peter L. Berger Centesimus was nothing less than "an emphatic and elaborated approval of the market economy as the optimal economic arrangement in today's world,"[2] for Kenneth Craycraft it was an endorsement of "the free market as the 'victorious social system' in the world, and as the type of economy that ought to be proposed in all places,"[3] while Michael Novak stated that "Pope John Paul II has brought economic liberty  ...into Catholic social teaching."[4] Although as a distributist I have been a critic of capitalism and free-market economics for years, it is hard to find too much to object to in a "guarded endorsement of regulated markets." If we are to have any exchange of economic goods at all we will need some sort of market, and it had better be regulated in some way or other if we are to have any hope of having justice in our dealings. This was exactly what the medieval guilds sought to do, to assure just prices, product quality, and a just remuneration for all involved in the productive process. To such a market I could certainly give more than a mere "guarded endorsement"! Nor could anyone find anything in the social doctrine of previous popes that would justify saying that they would withhold a "guarded endorsement" from "regulated markets."

So has George Weigel conceded that he was wrong all along, that John Paul II didn't really introduce a "new departure in Catholic social thought"? Sadly, no. What Weigel is doing is changing the goalposts, changing how he characterizes the teaching of Centesimus, claiming that "the Catholic left" is so dense, or so ideological, as not to recognize something so modest as a "guarded endorsement of regulated markets." But the real point at issue is not how we describe John Paul's teaching in Centesimus, not what exact words we use to characterize that teaching, but whether John Paul substantially changed the direction of the Church's teaching social teaching in that encyclical. Of course, even had he wanted to, he could not have done so, not consistent with the Church's claim to teach divine and natural truth authoritatively, as Weigel himself implicitly argues here and here. But the implication of so much conservative Catholic commentary on Centesimus is that John Paul did give a fundamentally new orientation to Catholic social thought, an orientation that amounted to much more than "a guarded endorsement of regulated markets," which indeed would hardly have been news at all.

The occasion of Weigel's latest effort was the publication in Poland of lecture notes from a course on social ethics which Karol Wojtyla gave in the 1950s in Krakow. These notes show him as faithfully transmitting the teaching of Leo XIII, Pius XI and Pius XII, which, as any student of them is well aware, is hardly friendly to free-market economics. Some have seized on these lectures as a means of counteracting the notion that Wojtyla was a life-long supporter of free-market capitalism. I'm actually inclined to agree with Weigel on the limited point that the publication of these lecture notes from over fifty years ago is not that earthshaking. We already had two of John Paul's social encyclicals, Laborem Exercens from 1981 and Sollicitudo Rei Socialis from 1987, both of which make clear that he was hardly an adherent of the kind of economics that Weigel and his friends have long supported, and which they did their best to convince everyone that John Paul had himself adopted in 1991.

So, aside from toning down his assessment of Centesimus, what is Weigel up to here? His big point is that John Paul - and he himself too, so he says - has always supported the idea that markets need to be "tempered and directed by a vibrant public moral culture - as well as by law and regulation." Well, again that's hard to disagree with, except that the devil can reside in the details. How, how much, and by whom are markets to be "tempered and directed"? Pius XI, whose strictures on capitalism and free-market economics in Quadragesimo Anno are among the most strident of any pope, could be seen as having little or no problem with markets "tempered and directed" by culture and law. If so, how is John Paul supposed to have introduced any novel orientation into Catholic social thought? Why, for example, the continual invocation of the freedom which he is claimed to have introduced into that teaching, in contrast with the earlier pontiffs? Either Weigel is claiming that John Paul did something substantially new or he isn't. If he is, then why the assertion of a mere "guarded endorsement of regulated markets"? If not, why the use of the phraseology of free-market libertarians, such as the Acton Institute's slogan of a "free and virtuous society," a slogan which masks nothing more than unfettered capitalism with a window dressing of pious platitudes, Chesterton's "easy speeches that comfort cruel men"?

Let me close by quoting Weigel himself:


popes are not like presidents or state governors, and doctrine is not like public policy...[and] a change of papal "administration" does not - indeed cannot - mean a change of Catholic "views." Doctrine, as the Church understands it, is not a matter of anyone's "views," but of settled understandings of the truth of things.

Weigel makes much of this when it comes to Pope Francis's obfuscations on marriage. But the same is true of any other area of Catholic teaching, including social doctrine. While it may develop, while it must be applied to new circumstances, it does not and cannot fundamentally change. As Benedict XVI wrote in Caritas in Veritate (no. 12), it is not "a case of two typologies of social doctrine, one pre-conciliar and one post-conciliar, differing from one another: on the contrary, there is a single teaching, consistent and at the same time ever new." The forceful rejection of free-market economics made by the popes from Leo XIII through Paul VI did not change in 1991, for "Doctrine, as the Church understands it, is not a matter of anyone's 'views,' but of settled understandings of the truth of things."

Notes:
[1] Both quotes from George Weigel, ed., A New Worldly Order: John Paul II and Human Freedom (Washington : Ethics and Public Policy Center, 1992), pp. 15 and 156. The first quote is from Weigel himself, the second from Fr. Robert Sirico.

[4] "Tested by Our Own Ideals" in A New Worldly Order, p. 139.
Posted by Practical Distributism