The issue of the homeless in society is starting to get more attention in the news in the United States. Unfortunately, I suspect that this is only because of the upcoming presidential election. It would be unfair to say that this issue gets no attention at other times, but it does seem to me that the level of attention has increased as a topic of interest for our federal elections. While any public attention to this issue is welcome - it is a real issue that needs to be addressed - it does seem that the form of attention and the ways of addressing it leave a lot to be desired. I think this is true from both a general perspective as well as a specifically distributist one.

Homelessness appears to be on the rise in the United States. While there always has been, and undoubtedly always will be (Mark 14:7) homeless among us, the number of people living on the streets does appear to have increased a great deal in recent years. It is possible that, with some cities declaring themselves to be "sanctuaries" for the homeless, some of them have managed to migrate to those urban centers. To the extent that this is true, it could be said that the number of homeless has not increased as much as the concentration in urban centers has. Why is this issue relevant to distributism? Because this social issue touches both on the economic and the political life of communities throughout the country and around the world.

From a distributist perspective, homelessness, like most things, should be handled on as local a basis as practically possible. Our current political and tax structure may limit this, but that can and should change. Religious and other private organizations should be the front line in providing hands-on assistance as much as possible. Locally run government assistance programs should be established for what these other organizations are not able to handle. From the distributist perspective, the fact that an issue is wide-spread does not mean that higher levels of government become the primary actors in addressing it. Therefore, distributism doesn't prohibit higher levels of government from offering assistance to the local providers of helping those in need, but they must not be allowed to usurp the role of the local organizations and government in directly addressing the issue. Therefore, even though homelessness is an issue throughout our society, and addressing it may require assistance from state or federal government, this assistance does not include setting policy for, or direct management of, assistance to those in need when more local organizations can do this.

We cannot ignore the concerns of those in the community who are not homeless. Many of them would willingly help the homeless, but also need to have their own concerns related to this issue addressed. These people would have the most motivation to help the homeless for both altruistic and personal reasons. Altruistic because they can see those in need and want to assist them. Personal because they are being negatively impacted when the homeless block sidewalks and doorways, and defecate and urinate in public parks, on the sidewalks, and in the doorways. Customers are driven away, businesses suffer or close, which means that these people have less money available to help those in need. Eventually, they will move away, taking their businesses with them, which means that there are fewer people to support the programs to help the homeless. 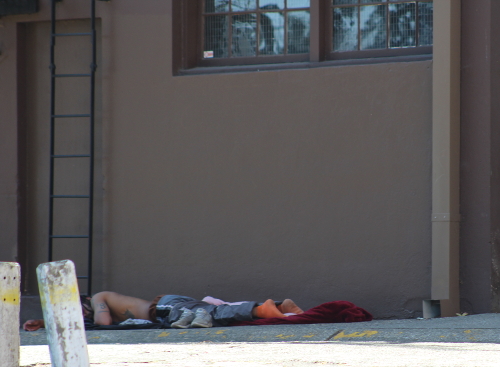 Another aspect where our society seems to be failing to address the issue of homelessness is that those (in government) who have taken charge of addressing it don't seem interested in identifying the various aspects to the problem. A "one size fits all" simple solution will not successfully address the issue because there are different reasons that people are homeless. You can't simply say, "we'll provide housing" to solve the problem if the problem goes beyond the simple availability of housing - and it does. While this is certainly a simplification, I believe we can identify at least four broad categories of homelessness which will clearly show that one solution will not be able to succeed in addressing the problem.

The first category, and maybe the largest, are those who are addicted to drugs. Some people will argue that these people are voluntarily homeless because they voluntarily started taking drugs, however we know that the drugs being used by the homeless alter mental processes and are so strongly addicting that they truly need outside assistance to break the drug use cycle. Therefore, I cannot agree that these people can truly be categorized as voluntarily homeless. Being under the influence of mind-altering drugs while out in public presents a public danger. Therefore the local government has an obligation to protect its society from those who fit in this category. There are programs out there which have been successful in assisting those in this situation to get off these drugs, and we should promote those programs implemented according to distributist principles as much as possible.

In both of the cases above, leaving these people out on the street without "harassing" them is not an act of compassion, and it certainly doesn't help them or the community negatively impacted by them. If we are committed to helping them, we must provide and support the institutions and programs which takes them from the street and into programs to help them and keep them off the street. These people are not only in need, but are suffering in a way that goes beyond their ability to help themselves.

The third category of homeless are those who are "down on their luck." They are the ones whose jobs have been eliminated or outsourced to other areas. They do not have the means to get the training they need to change careers or to move to where the jobs are. Programs to assist these people to get training, to live while they get it, to help them get jobs, and to get to where the jobs are, need to exist. I am including in this category those who desire to work to support themselves and their families. 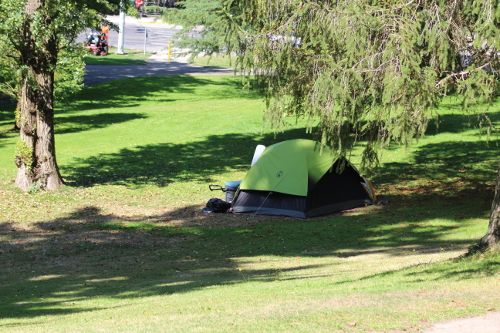 I believe there is broad support for helping those who fall into these three categories, even if that support is for different reasons. These are people who are in true need of help. I believe both a personal and a social responsibility exists to help them (Matt 25:34-46), and by doing so to help the overall community.  This would serve the common good, that is the good of the individual and also the good of the community as a whole.

The fourth category of homeless, which I believe is a small minority of the homeless, are those who are truly voluntarily homeless. Those who have chosen this as their own way of life separate from the community, but also simultaneously within it. I do believe we need to remain open to a certain degree with these people and not disrupt them unnecessarily. However, if they are living within a community, and taking advantage of the public goods of the community without actually being a part of the community or contributing to it, they are effectively stealing resources from those in need and from the community they refuse to join. If they are capable of supporting themselves but choose not to, then the social obligation to them is less than it is to the other categories. They should still be treated with human decency, but that doesn't mean we have to support them in their chosen life style or blithely accept them disrupting the community, especially when doing so would use resources intended to help those in real need. We must treat them with justice, but justice is equally owed to the society at large.

I have listed four broad categories, and I believe that each of them could be divided into sub-categories. It is an unfortunate reality of our time that neither of the major political parties, and the various economic philosophies, seem to be willing to truly address homelessness in the various ways it needs to be addressed. I believe that part of the reason for this is that they all approach it from either a highly centralized or extremely individualistic perspective. Both of these perspectives tend toward over-generalization in order to win the broadest level of support. The distributist movement looks at this situation from the local perspective. If the homeless in a particular community are those down on their luck, they can focus their efforts of assistance to address that problem. Another community where the majority of homeless are addicted to drugs can focus on that.

This is why distributists accept the idea of subsidiarity. The local community knows its problems better than more centralized and distant governments. They are in the best position to address the problems, even if they need assistance to accomplish what needs to be done.