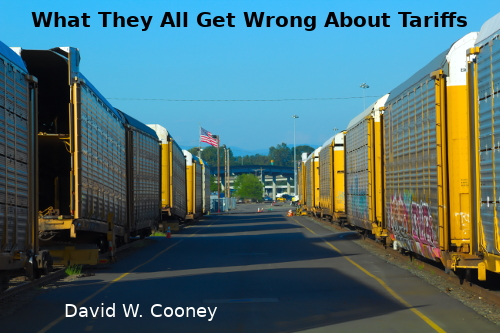 Let's start with where President Trump is wrong. He is using the tariff as a means of economic sanction - to punish another country. This is generally being characterized as a form of "trade war," which is not an unreasonable conclusion. The reason he is wrong, however, is because we have been living under the doctrine of free trade long enough that China can economically hurt us just as much as we can economically hurt them. You can only impose a punishment from a position of power, and we don't seem to have one. China is where our corporations produce our computers, cell phones, network infrastructure components, and many other things on which we have come to depend for our daily lives. It wasn't that long ago that flooding in a region of China cause a world-wide shortage of computer disk drives. China can retaliate quickly and effectively against any form of economic sanction we may want to impose. A concrete example of this type of economic, and therefore political, dependence is the United Kingdom's departure from the European Union. One of the issues they have to address is potential interruptions in their food distribution. The UK has the resources to provide this for itself, but they have spent decades allowing themselves to become dependent on foreign countries for basic necessities. This is now being used as an argument against becoming politically independent from the EU.

Those praising the tariffs as a means to improve American job opportunities are wrong because Trump's stated reason for imposing the tariff is not to bolster American jobs or American industries. It was a punishment for stealing intellectual property from American companies. Our situation is very different than when our economic might was building during the industrial revolution. As a nation, we desired greater economic power, but we were already economically independent for the majority of our daily needs and wants. We used an aggressive tariff system to not only protect our fledgling industries, but to open foreign markets to our strong industries.

Others, including those who believe in the Austrian School of economics, criticized these tariffs on the grounds that tariffs are bad for economics. For example, political commentator Ben Shapiro has stated on numerous occasions that tariffs are bad for the economy. He describes them as a tax on everyone for the benefit of the few. Are tariffs ever allowed according to his view? According to Shapiro, they should only be used for national security reasons or "in the name of liberty."


"As JFK put it, 'We will bear any burden in the name of liberty,' and, I'm sorry, but getting slightly more expensive goods from China in the name of liberty doesn't seem like all that much of a burden to bear to help the people of Hong Kong, who are flying the American flag while they are protesting for their freedom."

So, we can use tariffs as a tool for political change in a foreign power, but not to protect national industries and jobs. While other capitalists disagree with this view, the implications of this position are astounding when you consider that we are dealing with a socialist dictatorship.


Socialism is an Economic Good for Capitalists

This is a tacit admission that, except when national security concerns apply, or when we want to help influence some form of political change in the name of liberty, socialism is an economic good for capitalism. Is this a ridiculous assertion? Consider the following points.
These positions can only be explained by a view that considers the so-called global economy to be the primary and most important economy, followed by the national economy. Other capitalists may consider the national economy to be primary and the global economy secondary but, for those of the former view, socialism is treated as an economic good for capitalist markets.

In the end, President Trump backed down on the tariffs in hopes that it would keep our prices reduced through the Christmas shopping season. Does this not show that we have become economically dependent on foreign countries, including China?

What can Chinese President, Xi Jinping, say about this? If I were him, I would be using this as propaganda to the Chinese people, that it proves socialism is superior to capitalism, that capitalist production cannot compete with socialist production, and that people who live under capitalism are not able or willing to do the work necessary to produce what they want because they are too lazy and greedy, which is why they depend on socialist workers.


Socialism is not an Economic Good for Distributists!

When considering trade policy, a nation should look to maintain a level which won't cause too much economic turmoil for its people if trade gets interrupted. It should also not be the cause of the demise of your own producers. Some capitalists will declare that you are just forcing your own people to accept inferior products or to endure higher prices. They are ignoring the fact that many of their country's top competitors in international markets initially grew under the protection of tariffs against foreign competition. Markets are different from country to country.

Material costs and rents in the United States are different than those in communist China. Even when you factor in the competitive advantage given to many of our large corporations from government subsidies and preferential legislation, does it even come close to the level of government support of a socialist regime like China? No, the competitive advantage seem to be mainly against smaller competitors in our own country, which is why so many of our large corporations outsource production to China and other foreign countries. Tariffs can be used to protect our companies from this.

Distributism would rather see as many people as possible engaged in productive work in small independent businesses supporting their local economy. We do not advocating leaving them at the mercy of corporate interests that drain local economies and leave people dependent on government assistance. We do not advocate corporate interests that consider it better to have workers in a socialist regime produce the products we need than our own people.

Why Trump's tariffs on China are a big deal; CNN Business
https://money.cnn.com/2018/03/21/news/economy/trump-trade-china-intellectual-property-301/index.html

Trade Trucers Push President Trump to Back Off on China Tariffs; Breitbarthttps://www.breitbart.com/economy/2018/11/29/morechinatrucetalk/

Is Distributism Liberal or Conservative?