The Breakdown of the Supply Chain 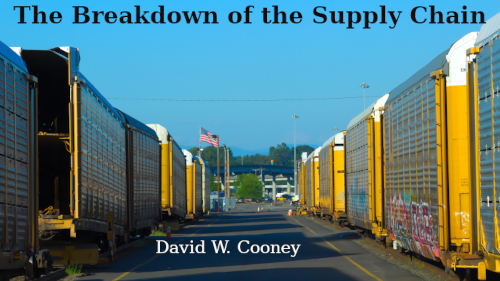 Not long ago, a cargo ship blocked a canal, causing international shipping to get backed up and a consequent shortage of supplies in many countries. As I write this, many cargo ships are gathered in the Pacific Ocean, waiting to get into the harbors for Los Angeles and Long Beach California. Apparently, there is a shortage of long distance truckers to take away the cargo already unloaded, which needs to be done to make room for the cargo on the ships that are waiting. There has been a lot of talk about the breakdown of the supply chain, but have these discussions actually addressed the real problem?

Comments focus on things like California’s laws, restrictions put in place to protect people from the spread of COVID-19, and the consequent shortage of long distance truckers due to things like “vaccine hesitancy.” However, are these the real problems? Isn’t it a problem that we have made ourselves dependent on foreign producers, not only for many of the things on which our economic and personal lives depend, but also for some basic needs like food and medicine?  Isn’t it a problem that we have segregated our urban and rural areas so that they are widely separated? It appears to me that these factors are not discussed much. In fact, despite the complete dependence of large urban areas on constant long distance trucking, there is talk in these areas about restricting trucks during certain times. I lived near Los Angeles in the 1980s, and I remember what happened when they tried it.

1980s Los Angeles had horrific traffic congestion during the so-called “rush hours” at the beginning and end of each work day. The plan to relieve some congestion was to restrict certain types of trucks during those hours, forcing them to reschedule their delivery routes to comply with the new restrictions. Smaller trucks, independent truckers, and small businesses making deliveries would be exempt from these rules. You might think that, as a distributist, I would praise this. Keep in mind that while we distributists have our ideals, we also accept the reality of what kind of society and economic system we actually live in. In a truly distributist society, these rules would be unnecessary and, if enacted, would probably have very little impact. However, Los Angeles in the 1980s wasn’t anything close to a truly distributist society.

It also needs to be understood that those enacting the new rule knew their dependence on the type of trucking that was going to be restricted. The mayor at the time, Tom Bradly, said, “No one doubts that truck shipments are vital to our economy. The old saying, ‘If you got it, a truck brought it,’ still largely applies.”1 The city leaders may have assumed that, because Los Angeles was the source of a lot of their business, these larger truck delivery services would acquiesce to the new rule and simply adjust their delivery routes. They were wrong. Some trucks refused to deliver at all. It was also speculated by some that others trucks lowered the priority of deliveries to Los Angeles. The result was not just shortages of incidental items, but also the beginnings of food shortages. In the end, the city quickly capitulated and removed the restrictions before things got too bad for the local community.

The point of relating this story from thirty years ago is that the fragility of our economic way of life has been known for a long time. It was well known when Los Angeles enacted the rule to reduce traffic congestion, but the city leaders were hopeful that those on whom they were dependent would play along. We have heard over the years, at least until recently, that our economy is strong and vibrant and growing. Have we asked according to what measure these conclusions were reached? If the economy of a major city, state, or country, can be crippled due to a “failure of the supply chain,” I would argue that it is not strong and vibrant, even if it is growing. In fact, continued growth under such conditions could mean that the economy gets weaker because of the increased dependence on outside communities.

The people of Western society, especially in the United States, like to think of themselves as independent and free. If your local community can be brought to economic ruin by a foreign power stopping shipments to your country, or by other areas stopping shipments to your community, then you are not independent and free. I am not talking about isolationism or not engaging in trade with other countries or communities. Those things are fine as long as your community as a whole does not become too dependent on them. If the majority of your supply chain, particularly for the basic necessities of life and business is local, then you are unlikely to experience a failure in it except through incompetence, which is a possibility at any level of government. However, if a failure in the supply chain from distant and foreign suppliers would cause your community to have an overall collapse due to shortages of food and other basic needs, then you are neither independent nor free.

So how do we change? Another problem we face in most of Western society is that we have been conditioned to look for that enlightened leader who will come in and impose the changes needed to make things all better. That won’t work because, contrary to an opinion that is growing in popularity, the leadership is not the main problem we are currently experiencing. We are. Those who look for the enlightened leader to save them are accepting a life of dependency. This is true both for those who look for an enlightened political leader and those who look for an enlightened economic leader. If you seek dependence, that is what you’ll get. Distributism, however, is for those who seek independence and, consequently, understand that pursuing that means accepting the risks that are inherently part of true independence and freedom.
Printable version
Title photo by David W. Cooney.  All rights reserved.
Posted by David W. Cooney