Distributism at the Catholic Economics Roundtable 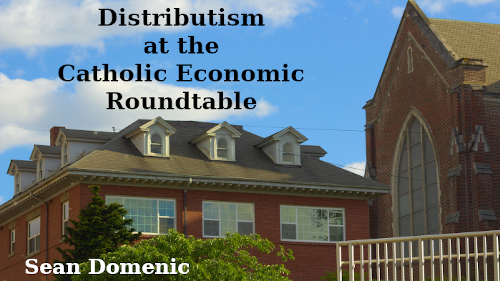 The following opening statement was given at the “Catholic Economics Roundtable” livestream hosted by Michael Lofton on 23 January 2021. It can be viewed on the Reason and Theology YouTube channel[1] and is available as a podcast on The Tradistae Podcast on Podbean.[2]

Hello, my name is Thomas Hackett.* I am a Catholic Worker, currently living and serving at Holy Family House in Lancaster, and a co-founder of Tradistae, a Catholic Worker organization devoted to the spread of Catholic Social Teaching.

I am also a distributist. To be clear, Distributism is not an adjustment to free-market capitalism. Nor is it simply socialism with a Catholic flavor.

Where socialism and capitalism are based on a modern, liberal, and false understanding of the human person, distributism is grounded above all in the philosophy of St. Thomas Aquinas and the Social Doctrine of the Holy Fathers, especially beginning with Pope Leo XIII in 1891.

Definitions are important, so I’ll begin by providing a simple definition:
➔ Distributism is an economic system with widespread ownership of private property; in other words, a system in which working families own the means of production with which they are laboring.
Does Catholic Social Teaching really call for distributism? Absolutely. From Pope Leo, 130 years ago, to Pope Francis, who reigns gloriously today, distributism is a constant theme.

This tradition begins in ​Rerum Novarum​, where Pope Leo XIII says: “The law, therefore, should favor ownership, and its policy should be to induce as many as possible of the people to become owners” (​§ 46).

Forty years later, Pope Pius XI reiterated that a just wage must be paid so that workers “​may increase their property by thrift” and emerge from the non-owning class. (​Quadragesimo Anno​ § 61)

In 1961, Pope Saint John XXIII said it even more bluntly: “​Now, if ever, is the time to insist on a more widespread distribution of property... It will not be difficult for the body politic.. to pursue an economic and social policy which facilitates the widest possible distribution of private property...”​ (​Mater et Magistra​ § 115)

Pope Saint John Paul II, who saw capitalism as a perversion of the natural order laid down in Genesis, declared​ that “the principle of the priority of labour over capital is a postulate of the order of social morality” ​(​Laborem Exercens​ § 15). He states also that ‘isolating’ capital and labor as ‘separate property’ is “contrary to the very nature of these means and their possession.” After calling for the “socialization... of certain means of production”, he clarifies that:

...merely converting the means of production into State property in the collectivist system is by no means equivalent to "socializing" that property. We can speak of socializing only when... each person is fully entitled to consider himself a part-owner of the great workbench at which he is working with every one else. A way towards that goal could be found by associating labour with the ownership of capital, as far as possible...
(​Laborem Exercens​ § 14)

Finally, ​Pope Francis proclaims in ​Laudato Si’​ that “Every ​campesino​ [peasant] has a natural right to possess a reasonable allotment of land where he can establish his home, work for subsistence of his family and a secure life. This right must be guaranteed so that i​ts exercise is not illusory but real”​ (§ 94).

Distributism is clearly demanded by Catholic Social Teaching. But what does it look like in practice?

What we can leave behind is obvious: no stock market, no usurious banks, no billionaires, and no multinational corporations. When Mammon is dethroned, we will have no need of these modern economic perversions. Distributists believe that the family is the foundation of society, so we naturally believe that businesses should operate on a family-scale. And when governments are needed to promote the common good, they should seek the flourishing of families and communities, instead of individual autonomy or the GDP.

What kind of world would this produce?

First, a society of solidarity. A more egalitarian distribution of the means of production means that workers will not be dependent on wage-slavery or the Welfare State. Workers can fully enjoy the fruits of their labor, as God intended. Furthermore, in a world not based on the profit-motive, the hoarding of the rich can be replaced with a Christian morality: one of hospitality and magnanimous gift-giving. We must both feed the poor ​and​ eliminate the cause of their dispossession.

Second, a society of subsidiarity. Political power requires economic power. So when ownership is concentrated in the wealthy elite, totalitarian governments—whether nationalist, neoliberal, or communist—are inevitable. Only by more widespread ownership is it possible to have a network of subsidiary temporal authorities, from global to local, as can be seen in the Middle Ages.

Third, a sustainable society. As scientific evidence and natural catastrophes have shown—and as Pope Francis has authoritatively explained in ​Laudato Si’​—our climate cannot keep pace with the unchecked growth of the Market. The Holy Father denounces “the lie that there is an infinite supply of the earth’s goods, and this leads to the planet being squeezed dry beyond every limit” (​§ 106). ​After robbing the medieval monasteries and the resources of the Third World, the atmosphere is the one “commons” left to be stolen and used for profit. Distributism, due to its agrarian roots, has always triumphed what Marxists have failed to see and what capitalists refuse to acknowledge: without a significant return to the land—along with an “ecological conversion” and a traditional view of our relationship to the natural world—we will destroy God’s Creation on which we all ultimately depend for our daily bread.

Fourth and finally, the return of an integralist society, ie, the social Kingship of Christ. Most would agree that we live in a deeply “secular” age. Saint John Paul II has taught that this is rooted in the “atheistic materialism” which is common to both capitalism and communism. We are all trapped in a bourgeois and acquisitive anti-culture. We are surrounded by wasteful consumerism, degenerate pornography, and unlimited streaming and scrolling—all for what? The increase of GDP, an idol which is the true god of this age. We need to return economics to its true purpose: supplying the physical needs and spiritual flourishing of mankind. For those who are committed to traditional culture, virtuous limitations, family values, living simply, and Christian community, distributism is the path forward.
Printable version
[Editors notes: The title picture leading this article has been updated. "Thomas Hackett" is the former pseudonym of Sean Domenic.
It should be noted that the Catholic Church has never officially endorsed any specific system of economics by name. What the Church has done is clearly lay out the moral and ethical principles that should govern the economic and political spheres of society. These principles include calls for the widespread private ownership of property. Distributism is a practical application of those principles, and that is the sense in which we can say the Church calls for Distributism.]
Notes:
1: “Catholic Economics Round Table with Trent Horn, Jose Mena and Thomas Hackett.” Reason and Theology, 23 January, 2021. https://www.youtube.com/watch?v=FS4tdutleaw
2: “#36 – Catholic Economics Roundtable Discussion, Part 1/2.” The Tradistae Podcast, 26 January, 2021. https://tradistae.podbean.com/e/36-catholic-economics-roundtable-discussion-part-12
Title photo by David W. Cooney.  All rights reserved.
Posted by Practical Distributism