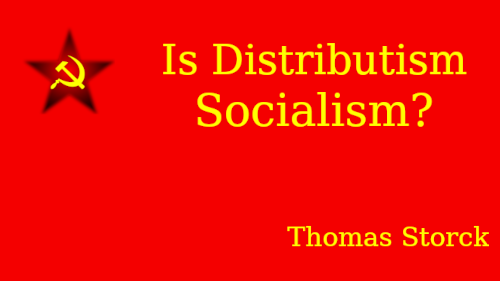 by Thomas Storck
References to or discussions of distributism on the internet are not hard to find. This is gratifying, for I would hazard a guess that fifty years ago almost no one had even heard of distributism. But even though the situation today is in most respects an improvement, these online references to distributism are not necessarily favorable. I have not attempted to count whether favorable or unfavorable mentions predominate, but there seem to be some ideas that are common to those critical of distributism. One is that distributism is simply a form of socialism. Now those who make this charge usually have little understanding of what socialism is, and especially of the great variety of economic programs that go by that name. Socialism is simply assumed to be state ownership of property, at least of productive property. That socialists often advocate for modes of ownership such as worker-owned enterprises or cooperatives seems to be largely unknown to the public.

While it may be excusable for the general public to be unaware of the varieties of socialist economic proposals, it is not excusable in a Catholic who attempts to write about Catholic social teaching or socialism or economics. As long ago as 1931 Pope Pius XI in his encyclical, Quadragesimo Anno (no. 113), pointed out that "it cannot be denied that [socialist] programs often strikingly approach the just demands of Christian social reformers." This encyclical obviously is required reading for a Catholic, and any Catholic who writes on matters of society or economic policy and who is not familiar with its contents is hardly different from a Catholic who writes on marriage but has never bothered to read Casti Connubii or Humanae Vitae.

All this is not written with the intention of justifying or rehabilitating socialism. Socialism is an evil, as I will explain shortly. But if socialism is an evil and socialists are hostile to Christian civilization, and hence in some sense are our enemies, we should recall our Lord's words that we must love our enemies (Matthew 5:44). And if some find this too difficult a commandment to obey immediately, perhaps they might begin by merely trying to be fair to their enemies. For if socialism is represented as always and everywhere simply a system of government ownership, this is a falsehood. No doubt socialists will usually call for more government ownership than both most supporters of capitalism and many distributists would like. And there can be legitimate debate among Catholics about the degree and nature of state ownership. But Pius XI makes it clear that the economic proposals of moderate socialists are not necessarily out of bounds. After the passage that I quoted above, he continues in this manner:

If these [moderating] changes continue, it may well come about that gradually the tenets of mitigated socialism will no longer be different from the program of those who seek to reform human society according to Christian principles.
For it is rightly contended that certain forms of property must be reserved to the State, since they carry with them an opportunity of domination too great to be left to private individuals without injury to the community at large. (no. 114)
Just demands and desires of this kind contain nothing opposed to Christian truth, nor are they in any sense peculiar to socialism. Those therefore who look for nothing else, have no reason for becoming socialists.  (no. 115)

If Pius XI's presentation of socialism is accurate - and a Catholic should hardly be in a position to question this - why is it that socialism is, as I said, an evil? It is, as Pius taught, because "it conceives human society in a way utterly alien to Christian truth" (117). That is, socialism has at bottom a materialistic and even atheistic view of the purpose of the human community and, thus, of human nature as well. As St. John Paul II wrote in Centesimus Annus, "the fundamental error of socialism is anthropological in nature." Particular socialist economic proposals may or may not be just or wise, but each of them must be evaluated in accordance with the whole corpus of the Church's social doctrine. But socialism, as a system, as a philosophy of life, is wrong because it denies God, or at best ignores Him. We see, in fact, that in Europe many socialist governments, when they attain electoral power, often make their peace with capitalist corporate economic power, but seldom refrain from attacking the Church or Christian education or Christian marriage.

Interestingly enough, John Paul goes on to note that as a philosophy capitalism shares in the same atheism as does socialism. "The atheism of which we are speaking is also closely connected with the rationalism of the Enlightenment, which views human and social reality in a mechanistic way" (no. 13.) It was of course, the thinkers of the Enlightenment, such as Adam Smith, who viewed the economy as a mechanism, about whom John Paul is speaking here. And from Smith's conception of the economy has descended the pervasive neoclassical form of economics which imagines it can capture the whole reality of economic transactions by means of graphs which view "human and social reality in a mechanistic way."

If [the moral law] be faithfully obeyed, the result will be that particular economic aims, whether of society as a body or of individuals, will be intimately linked with the universal teleological order, and as a consequence we shall be led by progressive stages to the final end of all, God Himself, our highest and lasting good. (no. 43)

The economy is generally regarded today by both capitalists and socialists as an independent module of human life, subject to its own laws, rather than, like any other sphere of human activity, essentially a field of moral choice. There are, it is true, economic laws, or better, tendencies in human nature, that it is unwise to simply ignore when formulating economic policies. These tendencies, however, do not operate in a vacuum. They are part of social life as a whole, which is why they operate differently according to diverse religious and cultural norms and legal systems. The human sexual drive, for example, although it is based on inherent tendencies in human nature, operates differently according to varying cultures and legal systems. No-fault divorce, for example, has tended to promote the breakdown of marriages, not because a law can change human nature, but because the tendencies of human nature function differently with different incentives of reward and punishment and varying ideals of conduct. If we are told that sexual fulfillment is a person's unquestioned right we will certainly end up with more disordered sexual activity than if we keep in mind the truth that God created us as sexual beings for the fundamental purpose of procreation and stable families. Similarly, a society in which there exists a robust recognition that the economy ought to serve the common good, and establishes laws and institutions designed to attain that end, will operate quite differently from one in which we are told over and over again that greed is the mainspring of economic action and getting rich is a praiseworthy goal of one's life.

Distributism is not socialism. The repeated charge that the two are really the same simply misses the point. Yes, there may be some overlaps between some socialist proposals and the ideas of distributists, for example, cooperatives and worker ownership. Just as there are overlaps between distributism and capitalism, such as the institution of private property. But distributism is different from both, not merely in the details of its proposals for widespread ownership, but in its very spirit, a spirit which proclaims

that particular economic aims, whether of society as a body or of individuals, [must] be intimately linked with the universal teleological order, and as a consequence we shall be led by progressive stages to the final end of all, God Himself, our highest and lasting good.