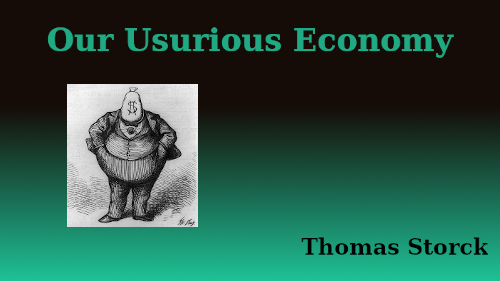 by Thomas Storck
What is usury and is it of any relevance to people today? For the most part, in modern times the term usury has come to mean the taking of excess, often outrageous, interest on a loan. But the classical definition in Catholic theology of usury was something a little different: the taking of any interest, in any amount, and no matter what the loan would be used for, simply because there is a loan contract. The most complete papal statement of this is found in the 1745 encyclical of Pope Benedict XIV, Vix Pervenit, the relevant portions of which run,

The nature of the sin called usury has its proper place and origin in a loan contract. This financial contract between consenting parties demands, by its very nature, that one return to another only as much as he has received. The sin rests on the fact that sometimes the creditor desires more than he has given. Therefore he contends some gain is owned him beyond that which he loaned, but any gain which exceeds the amount he gave is illicit and usurious.

One cannot condone the sin of usury by arguing that the gain is not great or excessive, but rather moderate or small; neither can it be condoned by arguing that the borrower is rich; nor even by arguing that the money borrowed is not left idle, but is spent usefully, either to increase one's fortune...or to engage in business transactions. The law governing loans consists necessarily in the equality of what is given and returned; once the equality has been established, whoever demands more than that violates the terms of the loan....

By these remarks, however, We do not deny that at times together with the loan contract certain other titles - which are not at all intrinsic to the contract - may run parallel with it. From these other titles, entirely just and legitimate reasons arise to demand something over and above the amount due on the contract.

For many today, and perhaps especially for economists, this sounds absurd, a relic of an outdated approach to economics that the world discarded when it entered into modernity. For is not money something which any enterprising person can usefully employ in making even more money, and therefore is one not justified in charging something for the use of his money?

The answer to this is No - unless a lender can point to some gain he will likely forgo or some loss which he will likely suffer on account of being temporarily deprived of his money, the lender is entitled to nothing above the principal loaned. For some centuries before Pope Benedict's encyclical theologians and jurists recognized the fact that a creditor might miss some opportunity for gain or suffer some kind of loss on account of his having loaned someone money. Accordingly, they recognized two chief possible titles to legitimate interest which correspond to these two possibilities, and which were known as lucrum cessans and damnum emergens. These, while they "are not at all intrinsic to the contract - may run parallel with it," and when they are present "entirely just and legitimate reasons arise to demand something over and above the amount due on the contract." And of course, in the past and especially today, there do exist numerous investment opportunities on account of which someone might claim to take advantage of one of these parallel titles. So, one might argue, the modern practice of regularly charging interest is fully justified according to the most severe tenets of Catholic moral theology.

And perhaps in an abstract way this contention is correct. In a highly commercialized society opportunities for investment are always present and surely by loaning money to one person, I miss out on some other profitable investment I might have made. But what makes this somewhat unreal as a reason for the taking of interest as the norm of economic life is that for the most part all the investment opportunities involve some kind of interest taking. So is an investor entitled to claim lucrum cessans on account of a loan he makes which deprives him of an opportunity to make a different loan? Can he claim a right to interest because of other interest forgone?

When the parallel titles of lucrum cessans and damnum emergens were originally formulated the economy was such that in many places there were hardly any opportunities for legitimate profitable investments. So a usurer's money would otherwise sit idle if it were not loaned to someone - say a craftsman or a farmer who needed to buy tools. In such a case the lender clearly had no right to receive more than the face amount of the loan, for he had forfeited no opportunity for gain at all. And even in commercial centers, financial opportunities tended to be more distinct acts, such as investing in a particular trading expedition, rather than ringing up one's broker and telling him to buy a certain security.

The problem then comes back to our economy. We have allowed an incredibly complex economy to arise over the last several hundred years, an economy in which interest taking is simply routine. Some of this interest can doubtless be justified by one of the parallel titles to which Pope Benedict XIV alluded. But it is difficult to disentangle just interest from unjust. This is why, in my opinion, that in the first half of the nineteenth century the Church began allowing confessors to absolve penitents who took interest on loans. It was not because the Church's doctrine had changed, but because it became increasingly difficult to separate legitimate interest from usury. Most ordinary confessors, or even moral theologians, lacked sufficient knowledge of the workings of the financial system to do so. It was easier just to allow moderate interest taking and presume that in most cases there was some excusing title.

What happened is that an economy had emerged in which morality played hardly any role - except for force or fraud both narrowly defined, the economy was more and more seen as a field where self-interest ruled. Indeed, early theorists of capitalism, such as Adam Smith, openly proclaimed this.

It is not from the benevolence of the butcher, the brewer, or the baker that we expect our dinner, but from their regard to their own interest. We address ourselves, not to to their humanity but to their self-love, and never talk to them of our own necessities but of their advantages. (Wealth of Nations, book I, chapter 2)

And with this self-interest came Adam Smith's "invisible hand," for the economy was conceived as a vast mechanism with self-interest as the mainspring of its action. And, so the theory went, if the government interfered with this self-acting economy, this would hamper economic efficiency and ultimately generate waste and a lower standard of living - at least for the rich!

How should Catholics in the twenty-first century approach the question of usury then? If we realize that interest taking is subject to the moral law, can we sufficiently distinguish between legitimate interest and usury? Just as in the early nineteenth century, so today, it would be difficult to examine each type of financial transaction for the presence of usury. But that does not mean that we must simply throw up our hands and acquiesce in our present capitalist system. There is another way.

Easier than ferreting out instances of usury in the economy would be to try to establish an economy in which the need for constant interest taking, and hence the possibility for usurious transactions, would be less than at present. Such would be an economy in which production and consumption were, as much as is feasible, at the local level, and hence there would exist a closer nexus between production and consumption than under the complex system of exchanges that we live with today.

What are some examples of this? Probably the best is farmers' markets, in which farmers can sell their produce directly to consumers. Here we have a truly local economy, and the simplest sort of economic transaction possible. For the more that goods are shipped long distances between their point of production and their point of sale, the more they change hands between producers, shippers and sellers, the more complex financial transactions will arise, and hence the more likely that interest taking, whether legitimate or not, will be seen as necessary. Any and every economic transaction that favors local production and consumption contributes in some degree to a healthy economy.

But unless there is a profound change in the way that people view the economy, we are not likely to embrace such economic practices. If we ask ourselves why it is necessary for the human race to engage in economic activity, the answer is obvious: to supply ourselves with those goods and services which are either strictly necessary for human life or which enhance our lives appropriately. The economy is not a field for personal enrichment unconnected to the provision of real economic goods, nor does it operate in a mechanical way. The desire to support oneself and one's family by one's economic activity is entirely legitimate - as long as that activity consists in providing one's fellows with necessary goods or services. What is not legitimate is engaging in financial manipulation which provides no goods or services and has no purpose beyond the enrichment of the speculator.

However far we are today from a Christian society or a Christian economy, the duty to seek "to impress the divine law on the affairs of the earthly city" (Gaudium et Spes, no. 43) is always present, and is always a worthy apostolate. Even in the worst of times we cannot give up on our task to make this world a more fitting offering to our Divine Lord.
Printable version
Title photo, "The Brains" by Thomas Nast, Harper's Weekly 1871.  Public Domain
Posted by Practical Distributism